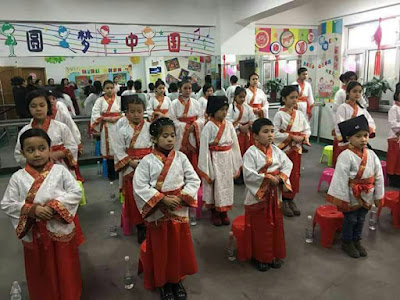 (Urumqi, Xinjiang—April 7, 2018) The department of education in Urumqi, the capital of China’s northwestern Xinjing Uyghur Autonomous Region, ordered all elementary and middle school students to turn in all books that are more than 10 years old and published in Kazakh, the native language of Kazakhstan’s often persecuted diaspora in China, on Monday.

“The students have to turn in all Kazakh magazines, newspapers, and books,” an anonymous Kazakh informant said. “The teachers have to visit every household, inspect the book collections, and submit all confiscated books to the schools. The schools will transfer the books to a waste recycling station.”

In addition, a Kazakh with knowledge of the situation said, “Students who graduated years ago were also required to turn in textbooks written in Kazakh and Uyghur that they used. Some families carried the books on tricycles or hired cars to bring them to the schools for incineration. Now, every (school) playground is filled with books.”

Bilingual schools that previously taught in Chinese and either Kazakh, Uyghur, or Kyrgyz are now only using Mandarin.

Dilxat Raxit, spokesman for The World Uyghur Congress headquartered in Germany, told ChinaAid that government departments in Hotan and Kashgar, Xinjiang, are also demanding that residents turn in books written in Uyghur, the language of another one of China’s ethnic minorities. He said, “The Chinese government is systematically confiscating books about religion, history, and culture in south, north, and east Xinjiang. The government encouraged the Uyghur people to report on each other. Those who harbor books published before the entrance of the Chinese army (into the region) will be arrested. The Chinese government also requires Uyghur people to hand in all books related to history, except those from official publishers.”

Dilxat says that these governmental departments fear that history books may have recorded perspectives and versions of history and culture that contradict the official, state-written account.

The confiscation of such books comes on the heels of the banning of several Turkic authors and in the midst of an ongoing crackdown on Kazakh and Uyghur people.