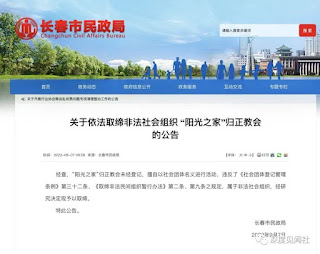 (Jilin, China—September 22, 2022) On September 7, the Civil Affairs Bureau in Changchun, Jilin province, northeast China, banned Sunshine Reformed Church, a house church not registered with the government. According to the official announcement, the church was banned on the grounds that it was “unregistered” and therefore illegal.

The church adheres to the reformed faith, which is universally recognized as orthodox and refuses to join the state-controlled Three-Self Patriotic Movement. Pastor Guo Muyun participated in signing “A Declaration for the Sake of the Christian Faith,” in 2018, which was initiated by Pastor Wang Yi from Early Rain Covenant Church. Guo Muyun has been repeatedly summoned by Chinese Communist Party security personnel.