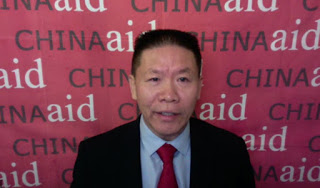 (Midland, TX—Oct. 7, 2020) Dr. Bob Fu, founder and president of ChinaAid Association and Midland Pastor, said he was shocked to learn that an exiled Chinese billionaire accused him of being a spy for the Chinese Communist Party (CCP). Following persecution in China, Fu received political asylum in the U.S. and moved to Midland.

Fu and his family were evacuated from their home Monday morning and moved to a safe location after a group of about 50 protesters arrived on a bus outside their residence. During a press conference that afternoon, Midland Mayor Patrick Payton said local and federal agencies were investigating alleged threats on Fu’s life.

In an interview with the Reporter-Telegram, Fu said Chinese businessman Miles Guo has targeted him. Guo recently made headlines as the owner of the yacht Steve Bannon was arrested on when he was charged in the “Build the Wall” scheme.

Guo, who also goes by the names Miles Kwok and Guo Wengui, established GTV Media Group after fleeing China following bribery charges. Bannon, up until his arrest, was the director of the company, which markets itself as a news organization exposing corruption within the Chinese government. Guo’s status as a whistleblower has come under scrutiny and he is currently the subject of a federal fraud investigation, according to news reports.

RELATED: Payton: Federal agencies are investigating threats against Bob Fu
on the GTV website, Guo has accused Fu of being a “fake priest,” a spy for the CCP and the leader of a human trafficking ring.

Why Guo has launched a campaign against Fu is a mystery, especially to Fu.

“It’s like a rollercoaster,” Fu said of the last week, in a phone interview from an undisclosed location. “We never imagined this would happen in a West Texas city.”

Fu first became aware of the allegations against him last Saturday, when a handful of protesters came to his home, he said. Those demonstrations escalated Monday morning when a much larger group arrived with signs and pamphlets that they passed out to Fu’s neighbors and left on car windshields.

When interviewed by reporters, the protesters declined to provide their names and denied being members of any organization. Fu said he believes they were either followers of Guo or actors paid to harass his family.

Guo has posted several videos to GTV’s social media pages “exposing” Fu and others he claims are working with the CCP. English subtitles of some of the videos provided by ChinaAid, a nonprofit founded by Fu, show Guo telling his followers about a “global kill cheaters campaign,” which includes Fu.

“We will fully support our comrades who take actions to kill those cheaters,” Guo says in one video, according to the subtitles. [The Reporter-Telegram verified the accuracy of the subtitles by a third-party Mandarin speaker.]

In another video, Guo refers to those he has launched campaigns against and allegedly says, “How can we terminate the Chinese Communist Party (CCP) if we cannot even kill these cheaters?”

Fu said he’s never met Guo and believes he might be a target because of his work with ChinaAid, which provides legal assistance to Christians who have been arrested in China. There are estimated to be more than one million people from religious or ethnic minorities currently in Chinese internment camps.

The FBI and CIA are investigating the alleged threats against Fu, Payton said Monday.

“I think that this is a wake-up call for us,” Fu said. “Knowing that we need to be vigilant and not take our freedom for granted.”

Fu thanked Midlanders for supporting him and said he and his family are safe. For those who have asked how to help, he urged community members to learn more about the CCP and persecution by the Chinese government.

The ChinaAid office has been closed as a precaution but staff continues to work remotely, Fu said.