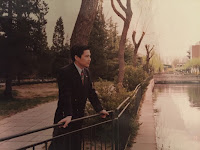 Officials phoned his brother, who had visited Peng just three days before, and relayed the news to him. By the time he reached the hospital, Peng had already been declared dead and transferred to a funeral home.

His sister, who lives in California, said she received a phone call from her living brother, but she only heard heavy breathing. After a few seconds, officials took the phone from his hands and related their version of the details to her.

However, authorities did not issue a death certificate, leaving his cause of death unclear. As a result, his family members have demanded an autopsy by an “international, independent medical authority acceptable to the family” and stated that a similar procedure conducted by the Chinese government will not be considered conclusive.

Officials have warned his overseas family members not to attend the funeral.

In response to these events, the family has released an official statement, which has been included below.

Following the government’s ban the China Development Union, Peng received a sentence to 18 months of re-education-through-labor on a charge unrelated to his political activities. In August 2000, he was released and fled to Thailand, which granted them refugee status until they were resettled in the United States a year later. There, he was baptized in a San Francisco church in July 2002.

When Peng returned to Thailand in 2004 to visit his aging parents, Chinese special agents devised a plan to lure him into Burma and abduct him back to China. Once he arrived in his homeland, he was charged with organizing and leading a terrorist organization, kidnapping and possessing counterfeit money. He was given a life sentence.

Peng’s case attracted international advocates such as the Congressional-Executive Commission on China and the organizations involved in the China 18 campaign.

The Peng family has asked that sympathizers honor his memory by making donations to China Aid and requested that their privacy be respected.

China Aid reports abuses, such as those experienced by the late Peng Ming and his family, in order to stand in solidarity with persecuted Christians and promote human rights and religious freedom in China

We have recently received news of Mr. Peng Ming’s sudden passing on the twenty ninth of November in Xianning Prison in Hubei Provence. He had been illegally arrested in May 2004 and subsequently sentenced to life in prison for his advocacy of human rights, democracy, environmentalism, and freedom.

The cause and details of his death are not shared with us. No death certificate is issued.

We have three requests:

Our family is deeply saddened by the tragic loss of our loving father, son, brother, and uncle, and someone who has served as a source of hope for many others throughout his life.

At this moment, we request privacy for our family. We are deeply grateful for the support we have received, and we thank you for your thoughts and prayers.

In lieu of flowers, donations may be made to China Aid in memory of Mr. Peng Ming.