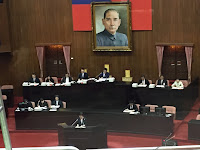 The Extemporaneous Motion on human rights in China condemns the Chinese government’s persecution of human rights lawyers, activists and religious citizens and urges Taiwan to discuss these issues with Chinese authorities. Legislator Mei-Nu Yu presented the decision, sponsored by 31 Members of the Legislative Yuan, which also included the support 30 international human rights organizations, including China Aid, among other non-governmental organizations.

A translation of the Extemporaneous Motion on human rights in China can be read in full below.

China Aid supports initiatives, such as the Legislative Yuan’s adoption of the Extemporaneous Motion, in order to promote human rights, religious freedom, and rule of law in China.

Members of the Legislative Yuan,

Human rights are values both universal and integral to the establishment of our country, Taiwan and irrespective of nationality, sex, race, religion or political affiliation. Taiwan has the responsibility to promote democracy, freedom and the development of the rule of law in regards to the citizens of the People’s Republic of China (hereafter referred to as “China”), thereby protecting the basic human rights of Chinese citizens. On March 10, 2016, representatives of 12 countries—the United States, Australia, the United Kingdom, Denmark, Finland, Germany, Iceland, Ireland, Japan, Norway, the Netherlands and Sweden—addressed China’s worsening human rights conditions during the United Nations Human Rights Council. Keith M. Harper, U.S. Representative to the United Nations Human Rights Council in Geneva, said, “We are concerned about China’s deteriorating human rights record, notably the arrests and ongoing detention of rights activists, civil society leaders, and lawyers. In many cases, these individuals have not been granted access to legal counsel or allowed visits by family members. These actions are in contravention of China’s own laws and international commitments.”

Many in Taiwan are concerned about China’s human rights violations, as Chinese and Taiwanese citizens maintain a close relationship through regular correspondence. The harsh treatment and abuse of Chinese citizens may similarly affect Taiwanese citizens in China. Thus, future communication between Taiwan and China must address and elevate the issue of protecting human rights. Chinese authorities must be pressed to review the country’s existing legislation protecting human rights, regularly release reports monitoring the progression of human rights in China, and report to the Legislative Yuan on the enactment or revisions of laws necessary to assist victims of human rights abuse in order to implement the United Nations’ International Covenant on Civil and Political Rights (ICCPR).

1. On Dec. 11, 2012, all Members of the Legislative Yuan, regardless of political party, approved the provisional Agenda Related Documents Number 080831, the contents of which showed concern over a list of 4,033 prisoners of conscience compiled by the Taiwan Association for China Human Rights (TACHR). Based on Article 18 of the International Covenant on Civil and Political Rights, [the Legislative Yuan declared], “[Taiwan] should pay attention to the democracy activists, civil rights activists, Tibetan people and other prisoners of conscience whom the Chinese government imprison in labor camps, prisons, and detention centers as a result of their political, religious or other beliefs. Furthermore, [the Legislative Yuan] should formulate an ordinance to save and provide assistance [to such people].” The Legislative Yuan officially documented the names of the 4033 prisoners.

2. The latest session of the United Nations Human Rights Council stated that Swedish citizen Gui Minhai, a bookseller who operates Causeway Bay Books in Hong Kong, and British passport holder Lee Bo, who is a shareholder in the bookstore, disappeared in Thailand and Hong Kong, respectively, and reappeared in China without official explanation. A statement read by the U.S. Representative to the Human Rights Council, Keith Harper stated that, “These extraterritorial actions are unacceptable, out of line with the expectations of the international community, and a challenge to the rule-based international order.” Theses actions involving individuals in Hong Kong represent a violation of the high degree of autonomy China declared Hong Kong would have under Hong Kong Basic Law.

U.S. Representative Harper also noted with concern the increasing number of confessions aired on state media prior to any indictment or judicial process. This method contradicts Chinese law, which guarantees a fair trial, as well as the rights and freedoms protected by the Universal Declaration of Human Rights.

Zeid bin Ra’ad, the current United Nations High Commissioner for Human Rights, also expressed his concern regarding the Chinese government’s arrest of more than 250 lawyers and activists since July 2015.

3. According to data gathered by China Aid, a U.S.-based human rights organization, more than 2,000 churches and crosses have been destroyed since the Xi Administration came to power, and authorities recently arrested a clergyman from a state-run Three-Self Church without credible justification.

Fu Cong also criticized Japan’s support for the joint statement, claiming Japan had refused to take responsibility for conscripting 100,000 “comfort women” in Asian countries during World War II. We, the undersigned, disapprove of this response. While neither human rights nor legal conditions are perfect in the U.S. or Japan, making accusations towards other countries does not change the fact that China continues to engage in serious human rights violations against its own citizens. The Chinese government cannot simply ignore its responsibility to improve human rights conditions by accusing other countries.

5. On Jan. 27, 2016, U.S., Canadian, German and Japanese ambassadors wrote a letter to Guo Shengkun, State Councilor and the Minister of Public Security of the People’s Republic of China, expressing their concerns regarding China’s draft of the Network Security Law and the Management of Foreign NGOs Law, which are still under consideration, and newly-implemented Anti-Terrorism Law. In the letter, the ambassadors stated concern that these new laws defined many non-violent expressions of dissent as terrorism and empowered the state to extensively review media or internet statements, and control technology in order to maintain national security. Hans Dietmar Schweisgut, Ambassador of the European Union to China and Mongolia, sent Guo Shengkun the same letter on Jan. 28, 2016. Unfortunately, the Chinese government’s response was articulated via Zhang Dejiang, Chairman of the Standing Committee of the National People’s Congress in a speech on March 9, 2016, in which he stated that China’s newly drafted laws reflected “typical Chinese characteristics….”

6. We, the undersigned, also must convey our highest respect to German president Joachim Gauck, who visited China on March 20, 2016. President Gauck met with seven individuals, including Mo Shaoping and Shang Baojun, the lawyers of incarcerated journalist Gao Yu, Wang Qiaoling, the wife of imprisoned human rights lawyer Li Heping, and Wang Zang, a poet. President Gauck also made a speech at Tongji University in Shanghai, emphasizing the importance of human rights and rule of law in China and stating that since the Vice-chairman of the Universal Declaration of Human Rights drafting committee, Peng Chun Chang, was Chinese, human rights could not just be a theory invented by western countries. [Using the example of West Germany’s progression from a fascist state to a democratic one] he also said, “Never again was power to take precedence over the law.” He especially pointed out that, “Mao Zedong brought about hunger, despair, and the catastrophe of the Cultural Revolution for Chinese people,” giving China a sharp warning [Editor’s note: This document misquotes Gauck. The proper quote, “And the Maoist mass campaigns in the 1950s, the hunger and despair, [and] the devastating Cultural Revolution…” was used as an example of hardships faced by the Chinese people].

7. This document has been written and approved by the following international NGOs: