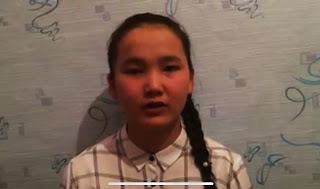 (Urumqi, Xinjiang—April 2, 2018) A father in China’s northwestern Xinjiang bid a tearful farewell to his wife and daughter living in Kazakhstan as he fears he will be detained in one of the nation’s notorious ideological re-education centers because his family returned to their homeland.

18-year-old Sayagul Nuerborat is issuing an urgent plea for her father, Shalayit Nuerborat, who called her and her mother on March 26 from Xinjiang, where Sayagul was born. Crying, he told them that he feared he would never be able to reunite with them in their new home in Kazakhstan.

Sayagul Nuerborat and her mother immigrated to Kazakhstan, their ancestral homeland, from Xinjiang, China, in July 2014. Shalayit Nuerborat and his other daughter remained in Xinjiang in order to sell their home and planned on joining them. After returning from a trip to visit his family on Feb. 3, 2017, however, Xinjiang police confiscated Shalayit’s passport, and he has not been able to leave the country since. Sayagul’s uncle later issued her father an invitation letter to Kazakhstan, at which point he was able to retrieve his passport. While transiting through Khorgas Port, however, the border guards stopped him, and the local police confiscated his passport again.

“My father said goodbye to us in tears,” Sayagul said of Shalayit’s call. “We guess that the local government is sending him to the ‘political training center’ or to prison. I hope that the government of Kazakhstan can use diplomatic means to negotiate and let us reunite with my father.”

These “political training centers” are part of a network of detention camps dedicated solely towards detaining Kazakhs, Uyghurs, and other members of ethnic groups with religious affiliations. Reportedly, some already imprisoned Kazakhs have suffered a mental breakdown from severe treatment. Shalayit is already in poor health and lacks the money to buy medicine.

Sayagul said the Xinjiang government might arrest her father in retaliation for her family’s immigration to Kazakhstan. Recently, local authorities have attempted to curb the international travel of ethnic minorities in their jurisdiction, including Kazakhs and Uyghurs. Many Kazakhs have already been arrested on account of their traveling back to Kazakhstan, and Xinjiang-born Kazakhs residing in Kazakhstan have been asked to return to China.

Desperate, Sayagul posted a video asking for help. Her father’s last words to her and her mother were, “I may not be able to reach you from now on, but don’t cry. Don’t worry about me. Take care of yourself. Take care of the children.”

ChinaAid exposes abuses, such as those suffered by the Nuerborat family, in order to stand in solidarity with the persecuted and promote human rights, religious freedom, and rule of law.