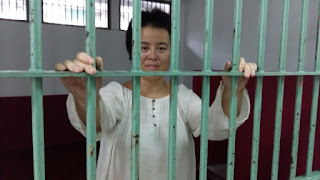 (Bangkok—July 8, 2019) Thai authorities issued an exit ban to a Chinese couple who have been granted entry to Canada and received refugee status from the United Nations High Commissioner for Human Rights (UNHCR) after they entered one of Thailand’s immigration detention centers.

Yang Chong and Wu Yuhua, also known as her alias, Ai Wu, fled China years ago after both underwent persecution—Yang, for his political opinions and pro-democracy work, and Yang for her defense of human rights activists.

Last August, ChinaAid issued a plea to the UNHCR to honor its protection of Yang and Wu and called on Thai authorities not to deport them as they sought resettlement in another country. The couple was later freed and allowed to resume their search for a nation that would welcome them.

Today, however, Wu issued a letter saying Thailand banned them from leaving the country, even though Canada agreed to accept them. Her full statement can be read below.

ChinaAid strongly urges the Thai government to allow Yang and Wu to immigrate to Canada and calls on Canadian officials to intervene on their behalf.

Yang Chong and I have been accepted as refugees by Canada. On May 23, we entered a Thai
Immigration detention centre in accordance with the law, waiting for review and approval before leaving Thailand. Unexpectedly, the Law Court of Pathum Wan in Thailand issued an exit ban without providing a reason.

We hereby appeal to the UNHCR, UN agencies concerned with human rights, and the Canadian immigration authority to urge the Pathum Wan court to show their reasons for issuing the ban. We would like to invite all human rights organisations to follow the progress of our case.

Yang Chong and I have decided to go on a hunger strike, starting on July 8. With Justice and conscience as the light of our hearts, we have no thoughts to spare regarding our personal safety.

If, unfortunately, we end up dying in custody, and our deaths brought a little extra light to justice and conscience, our lives would be regret-free. The only thing is that we are unable to contribute more to our country. These are my last words.


P.S. I have called Mr Guo Quan to inform him of our situation. In case of any inconsistency, messages from Mr Guo who relays my words should prevail. To my Sister: If you could send $2,000 asap for me to pay our debts in prison, that would be much appreciated.
May God be with us all. Amen!