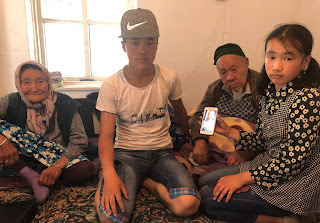 The continued elimination of Xinjiang Muslims

(Almaty, Xinjiang—July 6, 2018) More arrests have been made of Xinjiang Muslims in a continuation of the Chinese government’s crackdown on religious minorities. Families of those arrested are desperate to be reunited and struggling financially in their absence.

Sierkenbai Tolega is a 95-year-old Kazakh senior citizen who lives in the suburb of Almaty with his wife, Kakan Hasan, who is 87-years-old. Last year, their son, Ainy Sierkenbai, travelled to Xinjiang to take care of some finance issues before immigrating to Kazakhstan, but the police detained him and his eldest son, Hanar, in China.


According to a relative of the family, Ainy’s wife, Kaermuhan, missed her husband and son so much that her health condition worsened. She eventually passed away on June 15 leaving behind her two teenage children. The relative said, “Both kids’ Chinese passports expired, but they don’t dare to travel back to China, fearing that the police will arrest them just like they arrested their father and older brother. ”

Currently, Tolega and his wife are unable to support themselves. They are seeking assistance from their relatives and friends.

Gulibak Koan, a Kazakh woman who lives in the same area, is facing similar hardship. She said, “My husband travelled to China on Feb. 10, 2017. He has obtained the Kazakhstan green card, but he still uses the Chinese passport. It’s been a year and five months since the Chinese police took away his passport.”

Since his arrest, Gulibak has been looking after her four children alone. Her oldest child is 11 years old; the youngest is only two years old. She implores the international community to help her and urges the Chinese government to set her husband free, so he can reunite with her in Kazakhstan.

Another Kazakh man, Tulsonbek Abuduhas, described the situation of his 36-year-old brother, Doleken Doliti, who used to live in Xinjing. On October 15, 2017, Doleken was arrested at the Port of Khorgas before e
ntering China. After months of investigation, Tulsonbek found out that his brother was detained in a “political training center.”

According to Tulsonbek, more and more Xinjiang residents are sent to the “re-education camps”. The government does not have a specific agenda on the amount of time spent in detention. He said, “Some were detained for months. Others were detained for years.”

A Kazakh man called Sharshanbek Bazarbayi told the reporter about his 53-year-old sister-in-law, Usmuhan Ausbek, who the police arrested in July on her return trip to China from Kazakhstan. No one has heard from her since her detention in a local prison.

According to Sharshanbek, the police threatened their family, forbidding them to reveal any information. He said, “The police forbade us to contact people in other countries. My sister-in-law’s two daughters and two sons are still in China.”

The Chinese government began to build the political training centers and vocational and technical training center, which are essentially prisons, in 2016. The number of Uyghur people and Kazakhs being arrested has continued to increase. The government forces the prisoners to receive Chinese education and “ideological reformation.” In 2017, the government began to build new prisons in order to accommodate the large numbers of prisoners. According to informed sources, the government has detained a million people, most of whom are Muslims.

ChinaAid seeks to document and expose the abuses committed against Xinjiang Muslims in order to promote religious freedom, the rule of law, and human rights in China.