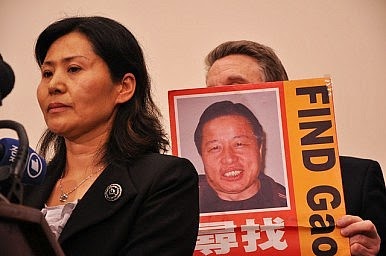 The Diplomat: A Major Setback to the Rule of Law in China

The Diplomat
By Jared Genser
September 15, 2014

With its treatment of Gao Zhisheng, Beijing shows the extent to which it fears the rule of law.
About a month ago and with little fanfare, the Chinese government released renowned Chinese rights lawyer Gao Zhisheng from Shaya County prison in Western China. He is now under house arrest, denied access to medical care, and convalescing from horrific and punishing torture. While at first blush, one might conclude his case is that of only a single dissident in an enormous country, a closer look reveals a lot about modern China and Beijing’s fundamental unwillingness to acknowledge and provide real remedies for people’s grievances.

A self-taught advocate and legal rights defender, Gao was once recognized among the country’s top 10 lawyers by China’s Ministry of Justice. Yet his advocacy for the country’s most vulnerable, including factory workers, coal miners, victims of land seizures, and persecuted Christians and Falun Gong practitioners, led the authorities to target and persecute him and his family for the last decade.

Officials shut down his law firm, disbarred him and placed his wife, Geng He, and their young children – who now have political asylum in California – under round-the-clock surveillance. In December 2011, just before the expiration of a suspended sentence for subversion and after 20 months of having been held in unknown locations, the Xinhua news agency announced that Gao would be imprisoned for the remainder of his original sentence.

We have now learned directly from Gao some of what he has been through during both his last disappearance and his imprisonment. It is far worse than anyone could have imagined. For some five years, Gao was held in a small cell, with no window, no ventilation, and only a five-watt bulb kept on around the clock. Guards were strictly instructed not to speak with him. He was not allowed any reading materials, television, radio, or access to anyone or anything. He was fed a single piece of bread and cabbage, once a day; as a result, he has lost roughly 23 kg (50 pounds) and now weighs about 60 kg (130 pounds). He also lost about half his teeth, with the rest on the verge of falling out. Despite ongoing intense pain coming from the nerve endings of exposed teeth and his inability to sleep from restless leg syndrome, he remains under house arrest and has been denied access to either a doctor or a dentist.

While Gao has been a particularly stubborn, relentless, and outspoken rights lawyer, countless other lawyers have faced harassment, intimidation, torture and imprisonment for serving as vigorous advocates on behalf of their clients. While the Chinese Constitution says that the government must “respect and safeguard human rights” and “protect property rights,” in practice it prefers to cover up, downplay and ignore rights abuses as long as possible, especially when they are the result of government policies aimed at controlling its population. Any lawyer who brings abuses to light, either through the courts or media, risks becoming a victim themselves.

Ironically, the problem in China today is increasingly less that there aren’t laws on the books to provide relief for victims, but rather that the gap between the promise of these laws and their implementation is especially large. While for ordinary cases, Chinese judges have done an increasingly admirable and professional job free from external interference, in cases with even the slightest sensitivity, the judiciary is neither independent nor impartial. Justice is rendered based on the desires of the Chinese Communist Party and judges know well that to ignore those demands would be to put their jobs and even their own freedom at risk.

Such an approach is incredibly short-sighted, particularly for a country whose rulers have always had a long view of history. In 2013, China’s spending on domestic security exceeded the People’s Liberation Army budget for the third year in a row. In all, Beijing spent some $124 billion to protect itself from its own people – a staggering outlay, even for a country that according to Tsinghua University professor Sun Liping, sees up to180,000 protests annually, or 500 per day. The Chinese government mostly tolerates these protests because it understands that the people need ways to vent their frustration and they are typically focused on local grievances and don’t fundamentally challenge the authority of the one-party system.

That said, however, an approach to legitimate criticism of government policies which merely provides an outlet to express frustration but does nothing to address the endemic challenges of a one-party system are destined to increase anger and hostility, not lessen it. The Chinese government has repeatedly argued that stability and economic growth for all must trump individual rights, but these are not irreconcilable differences. Indeed, it has acknowledged to a certain extent that its system has flaws, including corruption, mismanagement, waste and abuse.

A democratic system would most dramatically seek to align the hopes and desires of the Chinese people with the actions of its government. But if its goals are as it says, Beijing should not fear the rule of law, but embrace it. An independent and impartial judicial system would allow for truly meaningful outlets for people’s grievances to be addressed according to law and would in a system the size of China’s help dramatically in addressing the excesses of the one-party system. In the near term, it would also increase the stability of the existing system and decrease the need for people to protest.

Unfortunately, all signs point to the Chinese government’s greater fear and increasing repression of its own population. While that is a terrible trend, Gao Zhisheng’s case stands for the proposition that it isn’t enough for the Chinese government to control the courts, but it also wants to cripple the ability of victims to have vigorous and effective advocates even take up their cases.

As for Gao’s fate, his wife Geng He isn’t focused on the big picture. She is advocating for her husband to be able to travel from China to the United States to receive medical treatment in the most personal terms. Shortly after her husband’s release, she said “[i]f President Xi Jinping has any sense of decency or humanity, after crushing my husband both physically and psychologically, the least he could do is allow me as a devoted wife to care for him.” That task is up to President Barack Obama, who will next see President Xi Jinping in Beijing during and after the APEC Summit in November.