The Economist: Reforming the one-child policy: Monks without a temple

China may have begun a long end-game for its one-child policy. Experts say it cannot end soon enough 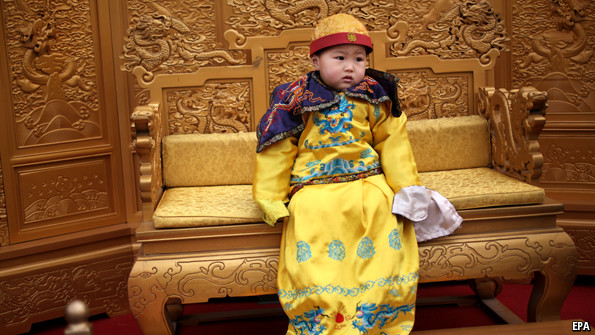 FOR more than three decades the bureaucrats who enforce China’s one-child policy have been among the most ubiquitous, and the most despised, in the country. They are now to lose much of their power, after a government reshuffle announced on March 10th. The question is whether this is the beginning of the end of the one-child policy itself.

The news came at a session of the National People’s Congress, the nation’s legislature, which is due to end on March 17th, and was used by the government to announce other ministerial mergers. The Ministry of Railways, which builds and regulates the country’s railways, is being divided, and some of its powers folded into a larger Ministry of Transport. Departments governing food safety and energy are being revamped. A reorganisation promises to bring some of China’s more adventurous maritime agencies under stronger supervision (see article).

But the most intriguing change is the reorganisation that will merge the family-planning bureaucracy, created purely to control population growth, with the health ministry to form a new Health and Family Planning Commission. Officials have vowed that this does not mean the one-child policy is about to come to an end. But public scrutiny of the policy is growing, along with pressure to loosen or scrap it altogether.

Chinese demographers say the social and economic damage done by the policy will be felt for generations. The labour pool is shrinking (by 3.45m in 2012 , the first decline in almost 50 years), the ratio of taxpayers to pensioners will decline from almost five to one to just over two to one by 2030 (see chart), and there are fewer children to support their parents. Shanghai is an example of the demographic time-bomb facing China: its fertility rate, at 0.7, is among the world’s lowest.

Wang Feng, a demographer and director of the Brookings-Tsinghua Center for Public Policy in Beijing, believes that public sentiment will eventually force the end of the policy and that the government’s reshuffle has started the countdown. Up to 500,000 people on the family-planning payroll—the “monks” of the one-child policy, as Mr Wang calls them—have “lost their temple”, he says (a little prematurely). Those who work in the health-care system are much more competent than those in family planning, he adds, so the family planners are more likely to lose their jobs.

But this will only happen if politicians decide the policy must go, and so far they have resisted. Some experts say that scrapping it would make little difference in practice.Surveys show that many parents in the cities want only one child anyway. But political leaders still fear that such a reform would result in a sudden burst of population growth, and so far they have held fast, despite the pleas of demographers. “It’s not necessary,” says Zuo Xuejin, of the Shanghai Academy of Social Sciences. “We don’t need the policy any more.”

Mr Zuo believes the next step should be to allow all couples to have two children. But that may still be too radical for the leadership. Exceptions are already made for couples anywhere in China where both parents are single children, as well as for people in rural areas whose first child is a girl and for ethnic minorities. In the past two years the family-planning commission wanted to test a new exception for couples of whom only one parent was a single child. It was a conservative proposal, applying to a few provinces and cities, but it still failed to receive top-level approval. Caijing, a magazine, has reported that after the reshuffle this experiment may be tested in areas with low fertility rates.

Meanwhile the emerging consequences of the one-child policy are openly discussed in state media. Reports about one social problem—elderly parents whose only child has died—recently featured on national television. Ren Yuan of Fudan University estimates 10m Chinese families have suffered that misfortune, including up to 300,000 in Shanghai. He says the government, having helped create the problem, should bear the burden of managing it.

A support group for such childless parents was formed in 2003 at a Shanghai cemetery. Parents there noticed each other at a special section for children, where dolls and other toys adorn the graves. One gravestone is shaped like a desktop computer. The most common concern expressed at their meetings is who will support them as they age. The group registered as an NGO in 2005, but only after overcoming official resistance: bureaucrats were concerned the bereaved families might want to whip up opposition to the one-child policy.

Even if they did, they would not be alone. State-run media and microblogs have recently featured reports of a horrific case of forced late-term abortion, leading to public outrage and ever louder calls for an end to the one-child policy. A once unassailable pillar of government control is suddenly looking fragile.