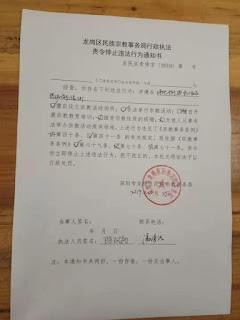 (Yuanyang, Henan—November 20, 2019) Zhongxin Church, a house church in Yuanyang, Henan, will be forcibly demolished by the government after Pastor Li Juncai’s arrest. The water and electricity of the church was shut off over 9 months ago, but Pastor Li’s elderly mother continues to live in the church, not allowing government to demolish it while waiting for her son’s release.

Pastor Li Juncai and three co-workers,Wu Raoyun, Ban Yun, and Ma Yanfang, were criminally detained by local police on the charge of “obstructing law enforcement” on Feb. 20, 2019. The co-workers have since been “released on bail”, but Pastor Li remains in custody.

The next day after they were seized, the cross of Zhongxin Church was forcibly removed. The slogans including “Love God and people” displayed in the church were erased and replaced with the national flag. A police vehicle has also been continually parked at the gate of the church in order to monitor any activity.


Pastor Li’s son, Li Chao, reported that his father was indicted on three charges including embezzlement, obstructing law enforcement, and destroying accounts. Now, the government plans to move forward with the demolition of the church.

Li Chao said, “The gate of the church has been sealed since his father was taken away this February. Authorities asked us to wait for the update, saying that they will rectify the church. It has been over 9 months. A few days ago, we were informed that [the government officials] would forcibly demolish the church.”

In addition, the water and electricity were shut off after the church was closed down. However, Pastor Li’s mother still stays in a cramped room in the church. Despite the difficult living conditions, she has been faithfully waiting for her son’s return and her other goal is not to let government demolish the church. Li Chao is now concerned that his grandma may be injured if dragged out before the demolition.

Zhongxin Church is the largest one in the region and was built in 2008. Li Chao said, “Our church did the required paperwork, has the land certificate, the planning certificate and the certificate of a religious venue issued by the government. Now, government officials want our land and intend to forcibly demolish our church.”

Zhongxin Church, the house church in Yuanyang, used to be a three-self church, but officially renounced its relationship with authorities in 2013 and merged with a local house church. The church provided services to 700-800 people, was the largest one in the local region.

Li Chao said, “We desire to keep the church, but not sure where we will end up, so what we can do is to pray to God.”

While Li Juncai’s defense lawyer, Wen Yu, thinks that the three charges accused of his client are untenable, Li Chao pointed out that his father’s conviction is the prerequisite for authorities to confiscate and demolish the church.