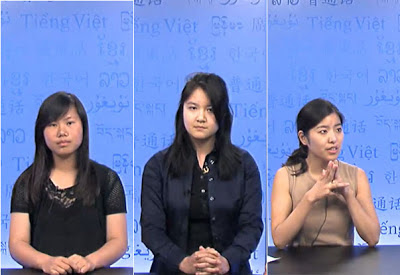 ‘The Last Time I Saw My Father’

In Washington to call for greater action on human rights ahead of a U.S.-China presidential summit, the daughters of three prominent political prisoners spoke to RFA’s Mandarin service about their relationships with their fathers and their hopes for the future:

I want to talk about the influence my father had on me, and how my opinion about him changed. Back in China, it’s hard to find out the truth of these things, but after I came to the U.S., I came to recognize what my father is, and changed my opinion and my feelings about him.

The last time I saw my father was in the last month before I came to the United States. I went to visit him in jail, but I was only able to talk to him for about 20 minutes, mainly about how our lives were going. Back then, my father’s health wasn’t too bad. He had some health problems, but they weren’t really that serious. I just talked to him about how I was doing, although I know he must have been going through a lot. At the time, he didn’t know that I was going to leave China. My mother didn’t tell him until afterwards. But I knew.

My father and I have maintained a regular correspondence, and his mental state seems pretty good … He’s very happy that I have been able to get a good education here in the U.S., although sometimes he feels guilty that he hasn’t been there to share my life with me. He only spent around one and a half years at home with me … sometimes that’s a source of great regret to me, that he and I never shared a father-daughter relationship like other people have. I was never able to mess around with him in a familiar sort of way, nor to tell him my innermost thoughts and feelings. It’s a real shame. I know that my dad is a great person, but I have no way to be with him. My mother and I got used to the way things are, but I know that deep down she still wants to be with him, because they love each other.

Well, the last time I saw my father in person was in 2003. We spent the summer over at his place in California, and so naturally we wanted to see our dad again in 2004. It was my birthday. So in 2004 we had planned to see my father. He had purchased plane tickets for me and my brother to go and visit him. But he also had another plan in the summer of 2004, which was to go to Thailand to set up a safe haven for political refugees like himself. But in Thailand, he was lured by eight secret Chinese police to the border of Burma and Thailand where he was kidnapped and sentenced to life. Thus, those plane tickets could never be used, and that was the last time I ever saw my father.

I’d like to express my hope. My father was a man of faith. He’s a Christian. But most importantly, my father is always hopeful, no matter what the situation. I get letters from my father every month, and although he cannot exercise his right to freedom of speech, he still exercises physically and spiritually, so even though he has all these barriers, he still has a lot of hope that he will be able in future to revive his mission for democracy in China.

Therefore I have hope that when President Obama and President Xi Jinping meet … that they will reaffirm these universal values of freedom, democracy and justice.

I’d like to say that we have a new change of leadership in China at the moment, and every time we have this switch of leadership I feel like every Chinese citizen and every American citizen feels hopeful that there will be change, and that China will progress in a more universally friendly way in terms of respecting human rights.

The last time I saw my father was in December 2008 when I went to visit him in the jail in Shaoguan. I was only able to spend about 30 minutes with my father. I went alone that time. We talked about some of the activities I’d been involved in to advocate for my father, and about what was going on at home, and my education, what my plans were for the future.

Since then, the Chinese government has refused to allow me back into mainland China, so I haven’t had the opportunity to visit him again. We write to each other.

I want to call on the Chinese government to release my father and to allow him to come home. I also want to thank everyone for their care and concern for my father.