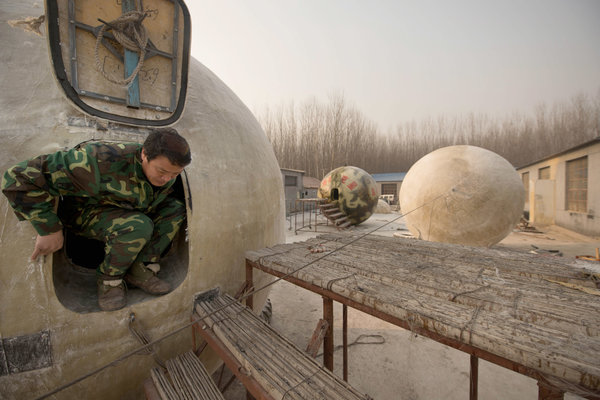 BEIJING — By the time Saturday rolls around (or not) it will be self-evident whether the doomsday predictions espoused by some Christian sects and New Age followers of the Mayan end-of-world prophecy were off the mark.

The Chinese authorities are not willing to wait until then.


Alarmed by spreading fears in China that Dec. 21 will bring global apocalypse, security officials across the country have been rounding up members of a renegade Christian group whose members have been aggressively promoting the notion that devastating earthquakes and tsunamis will coincide with the end of the 5,125-year Mayan Long Count calendar.

In recent days, the police in nine provinces have arrested nearly 1,000 devotees of the clandestine sect, the Church of Almighty God, whose adherents recently have begun holding outdoor prayer vigils and handing out pamphlets that warn nonbelievers that the only way to avoid extinction is to join their ranks.

Branded an “evil cult” by the Communist Party and maligned by mainstream Christian groups for claiming that God has returned to earth as a Chinese woman, the Church of Almighty God latched on to the Mayan end-of-days legend soon after the Hollywood disaster film “2012” took Chinese theaters by storm.

The movie, which gives China’s military a starring role as the savior of mankind, was a huge success here three years ago. A 3-D version that opened last month across the country has already earned $22 million, a substantial box office take in China.

It is impossible, of course, to gauge how many Chinese have been swept up by doomsday mania, or the less catastrophic version popular here that portends three continuous days of darkness, accompanied by a collapse of the nation’s electrical grid. Stores across the country have reported panic buying of candles, and a few entrepreneurs have made out well peddling survival kits or portable “Noah’s Arks.”

Liu Ye, a Beijing office worker, said he had already filled up the cataclysm-proof bunker he built in the mountains near Lhasa, in Tibet. The entry fee to his sanctuary was $8,000.

Yang Zhongfu, a businessman in coastal Zhejiang Province who usually makes a living producing scarves, says he has sold 26 steel-and-fiberglass floating spheres that each can contain and sustain as many as nine people for months. He said one anxious customer ordered 15 of the motorized vessels, which include oxygen tanks, solar lighting and seat belts to reduce jostling as passengers ride out a hypothetical deluge. The most expensive model, at $800,000, includes sacks of soil for growing vegetables.
“I told buyers I think they are overreacting to this so-called doomsday thing, but I respect their decision,” Mr. Yang said.

The fear among security officials that apocalypse fever might get out of hand is not entirely unfounded. Last week, a mentally unstable man who slashed students at a primary school in the central province of Henan told investigators that his rampage had been prompted by end-of-world jitters.

Public security officials across the country have been broadcasting warnings about purveyors of apocalyptic doom, some of whom are demanding money in exchange for salvation. “The end of the world is purely a rumor,” the Shanghai police said in a microblog message. “Do not believe it. Do not fall for the scam.”

But the brunt of the official crackdown has fallen on members of the Almighty God sect.
In an online notice posted Tuesday, provincial security officials described Almighty God as a criminal gang responsible for sowing social panic, preaching heresies and breaking up families. “It is a social cancer and a plague on humankind,” the notice said.
The sect, also known as Eastern Lightning and founded two decades ago in China’s frigid Heilongjiang Province, has long faced persecution. Although much about the group remains murky, some estimates suggest a membership of nearly one million.
Critics, including clerics from established Christian congregations, accuse Almighty God evangelists of strong-arm conversion tactics that include kidnapping and study sessions lasting days that they describe as brainwashing. Among the group’s central tenets is a belief that the messiah has arrived and that she is in hiding somewhere in China.

To protect themselves from near-constant persecution, congregants do not know one another’s names and instead call one another by nicknames like “Doggy” and “Little White Rabbit,” according to a report last week in China Business View. The church seems to have especially alarmed Chinese leaders by prophesizing the coming demise of the Great Red Dragon, its evocative code name for the ruling Communist Party.

Stephen R. Platt, a historian at the University of Massachusetts in Amherst, said Almighty God was just the latest in a long line of heterodox faiths that have spooked China’s rulers, often provoking a merciless crackdown. Over several centuries, members of White Lotus, an underground Buddhist millennial sect, nearly overthrew more than one imperial dynasty. In the mid-19th century, a rebel leader who claimed to be the younger brother of Jesus Christ established a short-lived “Taiping Heavenly Kingdom” in southern China and came close to toppling the Qing dynasty.

Mr. Platt, who is the author of a book on the Taiping Rebellion, said that such events, seared into the collective memory of many Chinese, have inspired the suppression of unorthodox faiths.

“Even religious organizations that are not overtly interested in overthrowing the government are seen as undermining the authorities because they direct their members’ attentions elsewhere,” he said.

Over the past two decades, Falun Gong, the quasi-religious meditation practice, has incited the party’s greatest wrath. In 1999, as many as 10,000 members held a surprise vigil outside the leadership’s residential compound in Beijing to demand an end to the defamation campaign that was being waged in the state news media. In response, the government began a pitiless witch hunt; thousands of practitioners were imprisoned and tortured.

Despite the crackdown, the group persists, and its leaders have become fixated on ousting the Communist Party.

“The government’s tactics have been completely counterproductive,” said David Ownby, a professor at the University of Montreal and an expert on the Falun Gong.

Although the Communist Party officially tolerates Protestantism and Catholicism — as long as the churches stay under the supervision of government-run associations — it remains deeply suspicious of Christianity. Last year, the central government issued an internal 16-page document instructing educators to root out evangelicals on campus who it said were seeking to “Westernize and divide China,” according to a copy of the document obtained by China Aid, a Texas-based Christian group.

So far, few people have been willing to publicly defend Almighty God adherents, who the Chinese news media say use sex, bribes and brute violence to win converts. Such assertions could not be verified.

Throughout the week, as the state media attacked congregants as swindlers and rumormongers, Teng Biao, one of the few Chinese lawyers to defend Falun Gong members in court, seemed to stand nearly alone in sticking up for the Almighty God sect.

“The government has no power to determine what is a cult,” Mr. Teng wrote on Twitter. “The law can punish only actions, not thoughts.”