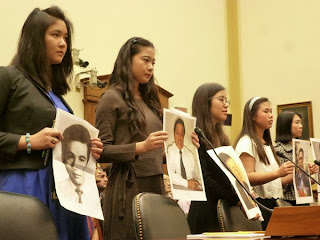 WASHINGTON, D.C. – Laurel School senior Lisa Peng took time off from filling out college applications on Wednesday to tell Congress how the Chinese government imprisoned her father because of his pro-democracy activism and to ask the U.S. government to seek his freedom.

She joined four other girls with jailed fathers at a House Foreign Affairs Subcommittee hearing to call attention to the Chinese government’s imprisonment and mistreatment of political prisoners.

“As an American citizen, I cannot merely stand by and tacitly approve as these fundamental freedoms are undermined,” said Peng, 17, of Shaker Heights. “It is Congress’ unwavering dedication to upholding those values and unrelenting efforts to free prisoners of conscience that give me hope for the future, for the possibility of telling my father in person how much we have all cared about his health and his dream for China’s future.”

Peng described how her father, Peng Ming, was kidnapped at gunpoint in 2004 as he tried to establish a safe haven for persecuted refugees in Thailand, sentenced to life in prison, and denied medical care for heart attacks, arthritis, malnutrition and kidney stones.

“I join with my fellow sisters here today to request Vice President Biden to ask Chinese leaders to release our fathers and to request an Oval Office meeting with President Obama to share our stories,” said Peng. “I know that my dream to be reunited with my father and my father’s dream for his country can come true with your support, persistence, and affirmation of the universal and fundamental values of our country: freedom, democracy and justice.”

The chair of the House Foreign Affairs subcommittee, New Jersey Republican Rep. Chris Smith, called the hearing a direct appeal to Beijing and said he hopes Beijing is listening.

“When China bullies, incarcerates, tortures and even executes a prisoner of conscience, their entire family and friends suffer an excruciating sense of loss, bewilderment, emotional pain and agony,” Smith said. “In a very real sense, everyone close to a prisoner of conscience goes to jail and lives a seemingly unending nightmare.”

Smith said he is appalled that China has been selected to be a member of the United Nations Human Rights Council, and vowed to send the human rights council the testimony delivered by Peng and the others witnesses.

“They need to hear the extraordinary agony that you and so many like you suffer as a result of having your dads, and other family members in other cases, ripped away from you,” said Smith.

Over the past week, Peng testified about her father’s case at a hearing called by members of parliament from Taiwan, and sent videotaped testimony to a separate hearing in Europe. She also gave numerous media interviews about his case. Her efforts are part of a campaign by a group called China Aid, which is trying to free her father and 17 other political prisoners in China.

Peng was born in Beijing, but denied official legal recognition by the state because she was her parents’ second child in a country that permitted couples to only have one child. She and her family fled China when she was four by climbing through the mountains of Vietnam to reach Thailand, where they were granted refugee status and allowed to emigrate to the United States.

She last saw her father at her seventh birthday party, although she has been able to communicate with him at Xian Ning Prison through monthly letters relayed by an uncle in China. In addition to spending much of her time striving for her father’s freedom, Peng is the principal keyboardist of the Cleveland Orchestra Youth Orchestra and was a featured high school Lincoln-Douglas debater at the City Club of Cleveland.

She said she hopes her efforts will put the plight of her father and other dissidents on the radar, so that officials from the United States, Taiwan and other countries raise them when they communicate with Chinese authorities.

“I hope that my father will first and foremost be given proper medical attention and visitation rights, and ultimately, I seek his release,” said Peng.”Even though I have immense hope my father will be released, we have to make that not just a dream, but a reality.”