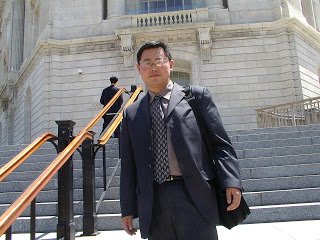 The schedule of Pastor Wang Yi’s trial is still uncertain

(Chengdu, Sichuan—November 22, 2019) Lawyer Zhang Peihong announced that the date and time for Wang Yi’s trial is still uncertain at this point. In the meantime, he said that Wang Yi has appointed two other defense lawyers for himself after he was officially banned from defending the imprisoned pastor.

In the announcement made on Nov. 22, Lawyer Zhang corrected the news circulating online that Pastor Wang Yi was to be tried on Monday, November 25. The new defense lawyers haven’t accessed the files or received the official indictment. However, they are allowed to meet with Wang Yi, which Lawyer Zhang was never allowed to do. After the last meeting, they claimed that he was good mentally and physically.

Nevertheless, Jiang Rong and Joshua, Wang Yi’s wife and kid, remain under house arrest at an apartment in Chengdu. They are allowed occasional contact with family, but they are not allowed to see them and even prohibited from sharing updates with others.

Over 100 attendees of Early Rain Covenant Church have been taken to the police station for questioning without any paperwork since the crackdown on the church occurred last winter. More than one person mentioned that the questions by police included loaded questions such as naming the leader of the church, their usual offering amount, and where they buy their books about faith.

During the church members’ detentions, there have been accusations against officials of forced confessions, unknown medication, and brainwashing.

Elder Qin Defu of Early Rain Covenant Church, who is in custody as well, was recently given a trial date.