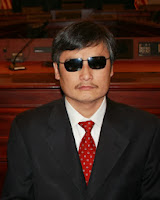 The Sun Daily reported that Chen Guangcheng has decided to join three American organizations including the Witherspoon Institute, which is known for its conservative values. In addition, Chen intends to join the Lantos Foundation for Human Rights and Justice and the Catholic University of America. The full report from The Sun Daily can be read below.

The blind-since-childhood human rights campaigner will jointly join the Witherspoon Institute, the Catholic University of America and the Lantos Foundation for Human Rights and Justice.

Bob Fu, the founder of the Christian rights group China Aid, said Chen was joining “three institutions across the political spectrum and ideologies.”

The Witherspoon Institute, which also confirmed the appointment, is based in Princeton, New Jersey and is known for its opposition to abortion and same-sex marriage.

The Lantos Foundation is named for Tom Lantos, a late Democratic congressman and human rights activist. Catholic University, based in Washington, is considered the national US university of the Roman Catholic Church.

Chen, a self-taught lawyer, was imprisoned for four years after exposing how authorities in eastern Shandong province forced women to undergo forced abortions as they implemented China’s one-child-only policy.

After his release in 2010, Chen was put under house arrest and said he and his wife were subjected to severe beatings. Chen last year scaled the walls and escaped for the safety of the US embassy in Beijing on the eve of a visit by then secretary of state Hillary Clinton.

Chen was allowed to move to study at New York University but said in June that he was pressured to leave due to “unrelenting pressure” by China on the school, which is opening a Shanghai campus.

New York University adamantly denied the allegations, saying it accommodated him generously but only planned to keep him for one year.

Jerome Cohen, a professor at the university and scholar of human rights in China, said he was trying to shield Chen from getting caught up in US domestic politics, an argument resented by some of the activist’s Christian-oriented supporters.

Chen is not known to be religious and has fought against forced abortion, without getting involved in the divisive US debate on whether women should have the right to end their pregnancies voluntarily. – AFP