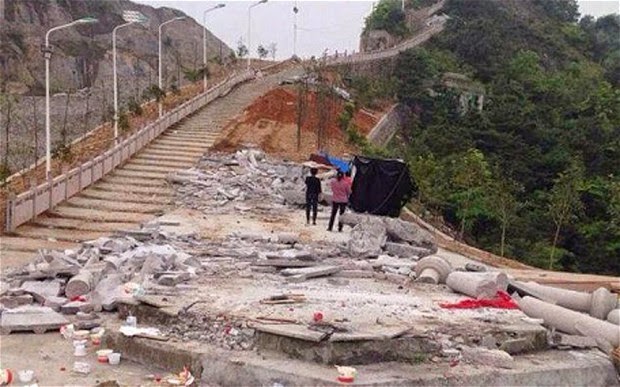 The Telegraph
By Tom Phillips, Shanghai
01 May 2014

Holy statues depicting Biblical scenes including Jesus’ crucifixion have been destroyed, removed or “hidden” by authorities in a city known as China’s Jerusalem, it has emerged, fuelling fears of a renewed government offensive against Christianity.

Around 50 government workers sealed off Wenzhou’s Longgang Hill, a site of Catholic pilgrimage, on Saturday and used bricks to “hide” statues portraying moments from the Passion of Christ.

Statues of Jesus, the Virgin Mary and Saint Joseph, each weighing up to five tons, were “bricked around to hide them from public view” while cranes were used to remove other holy statues and tablets from the park. “All other religious decoration was demolished,” according to UCA News, a news agency covering Catholic issues in Asia.

“About 100 Catholics who came to watch the removals were blocked at the entrance,” said one witness, who asked not to be named because of “security concerns”. “Some who managed to sneak in sang hymns and prayed while watching. Some could not hold back their tears.”

“The authorities’ behaviour is reminiscent of the smashing of church property during the Cultural Revolution,” another member of the city’s Catholic community told UCA News’ Chinese-language service.

The removals, which were first reported on Thursday night, took place last Saturday, 48 hours before government demolition teams razed a Protestant church in the same city.

Wenzhou’s Sanjiang church became a symbol of resistance to the Communist Party’s draconian religious policies in early April. Thousands of Christians formed a human shield around the place of worship after plans to demolish it were announced but the building was eventually levelled on Monday evening.

A list that was compiled by Christian activists and shown to The Telegraph this week names more than 20 churches that are facing or have already suffered some form of demolition work.

Officials deny the demolitions are an attack on Christianity, claiming their campaign is aimed at illegal constructions “including factories and Buddhist temples”.

Authorities would “aggressively push on with the demolition of illegal buildings,” the state-controlled Zhejiang Daily reported this week.

The motive for what appeared to be a “widening crackdown” was unknown but “an increasingly violent standoff between authorities and the church” was now under way, UCA News reported.

Four Catholics were beaten and injured by government officials in Wenzhou last week when an argument broke out during the forced demolition of one church, the news agency claimed.