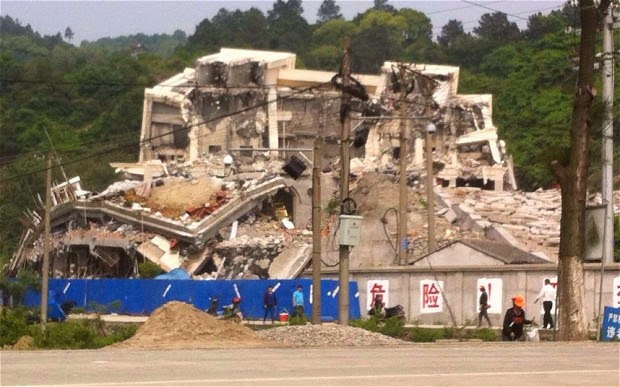 Beijing has ordered an end to an “anti-church” demolition campaign that has infuriated China’s fast-growing Christian population and drawn international condemnation, a Chinese bishop has claimed.

At least 400 churches in the eastern province of Zhejiang have faced partial or total demolitions since authorities began the campaign early last year, according to activists.

However, Bishop Paul Meng Qinglu, the deputy chairman of the Communist Party-controlled Chinese Catholic Patriotic Association, said Beijing had now issued an “internal order” calling for an end to the demolition of churches and their crosses.

The Catholic leader was told of the development during a recent meeting of religious leaders in Beijing, reported UCA News, a news agency covering Catholic issues in Asia.

Communist Party officials claimed their one-year campaign was aimed at all “illegal structures” and not just Christian churches.

However, building code violations were merely a “pretext” for “a large-scale campaign against churches,” Amnesty International said last month.

The initiative saw violent clashes break out in usually tranquil places of worship as elderly Christians sought to defend their churches from demolition teams by holding sit-ins, forming human shields or even barricading their gates with boulders.

In one of the most notorious episodes thousands of believers occupied the Sanjiang mega-church last April in a failed attempt to save it from destruction.

Before the bishop’s claims this week, there had been hints that the campaign was easing.

The number of demolitions fell to just four in December, according to a timeline produced by the Christian Solidarity Worldwide group. The last took place on December 28, when officials removed the cross from a church in the city of Taizhou.

Three Christians who had opposed the demolitions were released earlier this month after spending a total of 255 days in police detention, according to China Aid, another Christian activist group.

Zhang Mingxuan, the head of the Chinese House Church Alliance, said he was not aware of an official order to stop the campaign but would welcome such a move.

“There are many people who believe in God in China,” he said. “If they allow the demolitions to continue, it will cause conflict between these people and the country. If they continue demolishing, it will just make believers not trust the government, which is not good for the stability of regime.”

Despite reports that the demolitions had ceased, tensions between Communist Party officials and congregations remained high in the city of Wenzhou, which is known as “China’s Jerusalem” because of its large and vibrant Christian community. A lay leader there told UCA News the situation remained “sensitive”.

Huang Yizi, a 40-year-old preacher who was detained last August after speaking out against the campaign, is still understood to be in custody.

Zheng Leguo, a religious leader from Zhejiang, said it was too early to say if the situation had genuinely improved.

Officials in one area had been discussing “restricting children’s catechism classes, unregistered Bible and theology formation, as well as the operating space of unregistered house churches,” he claimed.