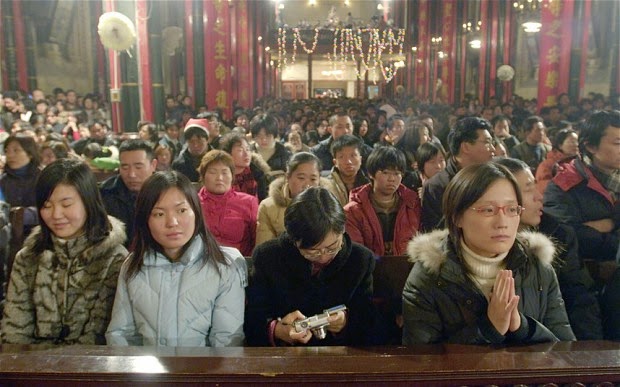 The Telegraph: China on course to become ‘world’s most Christian nation’ within 15 years

It is said to be China’s biggest church and on Easter Sunday thousands of worshippers will flock to this Asian mega-temple to pledge their allegiance – not to the Communist Party, but to the Cross.

The 5,000-capacity Liushi church, which boasts more than twice as many seats as Westminster Abbey and a 206ft crucifix that can be seen for miles around, opened last year with one theologian declaring it a “miracle that such a small town was able to build such a grand church”.

The £8 million building is also one of the most visible symbols of Communist China’s breakneck conversion as it evolves into one of the largest Christian congregations on earth.

“It is a wonderful thing to be a follower of Jesus Christ. It gives us great confidence,” beamed Jin Hongxin, a 40-year-old visitor who was admiring the golden cross above Liushi’s altar in the lead up to Holy Week.

“If everyone in China believed in Jesus then we would have no more need for police stations. There would be no more bad people and therefore no more crime,” she added.

Officially, the People’s Republic of China is an atheist country but that is changing fast as many of its 1.3 billion citizens seek meaning and spiritual comfort that neither communism nor capitalism seem to have supplied.

Christian congregations in particular have skyrocketed since churches began reopening when Chairman Mao’s death in 1976 signalled the end of the Cultural Revolution.

Less than four decades later, some believe China is now poised to become not just the world’s number one economy but also its most numerous Christian nation.

“By my calculations China is destined to become the largest Christian country in the world very soon,” said Fenggang Yang, a professor of sociology at Purdue University and author of Religion in China: Survival and Revival under Communist Rule.

“It is going to be less than a generation. Not many people are prepared for this dramatic change.”

China’s Protestant community, which had just one million members in 1949, has already overtaken those of countries more commonly associated with an evangelical boom. In 2010 there were more than 58 million Protestants in China compared to 40 million in Brazil and 36 million in South Africa, according to the Pew Research Centre’s Forum on Religion and Public Life.

Prof Yang, a leading expert on religion in China, believes that number will swell to around 160 million by 2025. That would likely put China ahead even of the United States, which had around 159 million Protestants in 2010 but whose congregations are in decline.

By 2030, China’s total Christian population, including Catholics, would exceed 247 million, placing it above Mexico, Brazil and the United States as the largest Christian congregation in the world, he predicted.

“Mao thought he could eliminate religion. He thought he had accomplished this,” Prof Yang said. “It’s ironic – they didn’t. They actually failed completely.”

Like many Chinese churches, the church in the town of Liushi, 200 miles south of Shanghai in Zhejiang province, has had a turbulent history.

It was founded in 1886 after William Edward Soothill, a Yorkshire-born missionary and future Oxford University professor, began evangelising local communities.

But by the late 1950s, as the region was engulfed by Mao’s violent anti-Christian campaigns, it was forced to close.

Liushi remained shut throughout the decade of the Cultural Revolution that began in 1966, as places of worship were destroyed across the country.

Since it reopened in 1978 its congregation has gone from strength to strength as part of China’s officially sanctioned Christian church – along with thousands of others that have accepted Communist Party oversight in return for being allowed to worship.

Today it has 2,600 regular churchgoers and holds up to 70 baptisms each year, according to Shi Xiaoli, its 27-year-old preacher. The parish’s revival reached a crescendo last year with the opening of its new 1,500ft mega-church, reputedly the biggest in mainland China.

“Our old church was small and hard to find,” said Ms Shi. “There wasn’t room in the old building for all the followers, especially at Christmas and at Easter. The new one is big and eye-catching.”

The Liushi church is not alone. From Yunnan province in China’s balmy southwest to Liaoning in its industrial northeast, congregations are booming and more Chinese are thought to attend Sunday services each week than do Christians across the whole of Europe.

A recent study found that online searches for the words “Christian Congregation” and “Jesus” far outnumbered those for “The Communist Party” and “Xi Jinping”, China’s president.

Among China’s Protestants are also many millions who worship at illegal underground “house churches”, which hold unsupervised services – often in people’s homes – in an attempt to evade the prying eyes of the Communist Party.

Such churches are mostly behind China’s embryonic missionary movement – a reversal of roles after the country was for centuries the target of foreign missionaries. Now it is starting to send its own missionaries abroad, notably into North Korea, in search of souls.

“We want to help and it is easier for us than for British, South Korean or American missionaries,” said one underground church leader in north China who asked not to be named.

The new spread of Christianity has the Communist Party scratching its head.

“The child suddenly grew up and the parents don’t know how to deal with the adult,” the preacher, who is from China’s illegal house-church movement, said.

Some officials argue that religious groups can provide social services the government cannot, while simultaneously helping reverse a growing moral crisis in a land where cash, not Communism, has now become king.

Ms Shi, Liushi’s preacher, who is careful to describe her church as “patriotic”, said: “We have two motivations: one is our gospel mission and the other is serving society. Christianity can also play a role in maintaining peace and stability in society. Without God, people can do as they please.”

Yet others within China’s leadership worry about how the religious landscape might shape its political future, and its possible impact on the Communist Party’s grip on power, despite the clause in the country’s 1982 constitution that guarantees citizens the right to engage in “normal religious activities”.

As a result, a close watch is still kept on churchgoers, and preachers are routinely monitored to ensure their sermons do not diverge from what the Party considers acceptable.

In Liushi church a closed circuit television camera hangs from the ceiling, directly in front of the lectern.

“They want the pastor to preach in a Communist way. They want to train people to practice in a Communist way,” said the house-church preacher, who said state churches often shunned potentially subversive sections of the Bible. The Old Testament book in which the exiled Daniel refuses to obey orders to worship the king rather than his own god is seen as “very dangerous”, the preacher added.

Such fears may not be entirely unwarranted. Christians’ growing power was on show earlier this month when thousands flocked to defend a church in Wenzhou, a city known as the “Jerusalem of the East”, after government threats to demolish it. Faced with the congregation’s very public show of resistance, officials appear to have backed away from their plans, negotiating a compromise with church leaders.

“They do not trust the church, but they have to tolerate or accept it because the growth is there,” said the church leader. “The number of Christians is growing – they cannot fight it. They do not want the 70 million Christians to be their enemy.”

The underground leader church leader said many government officials viewed religion as “a sickness” that needed curing, and Prof Yang agreed there was a potential threat.

The Communist Party was “still not sure if Christianity would become an opposition political force” and feared it could be used by “Western forces to overthrow the Communist political system”, he said.

Churches were likely to face an increasingly “intense” struggle over coming decade as the Communist Party sought to stifle Christianity’s rise, he predicted.

“There are people in the government who are trying to control the church. I think they are making the last attempt to do that.”