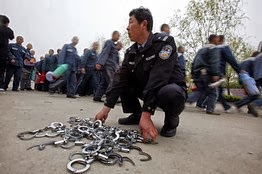 (Oct. 21, 2013) The Wall Street Journal published an opinion-editorial by American physician Devra Marcus about her attempt to visit ailing Christian dissident Zhu Yufu on Thursday. In the piece, Marcus describes her encounter with prison officials in Zhejiang No. 4 Prison in Hangzhou, the provincial capital of coastal Zhejiang province.

“Devra’s mission has accomplished more than anyone hoped it would and its positive effects continue to grow,” Bob Fu, founder and president of ChinaAid. Fu said that while many had hoped that the prison official would be receptive to Marcus’ request, her actions allowed a Chinese attorney to enter the case and use his skills to “publicly battle for Zhu’s release.”

“To date, millions of people in China and elsewhere are aware of what Devra did. The Chinese mircoblog Wiebo and VOA, RFA as well as similar radio programs from France and Germany have covered her conduct in China,” Fu said. “Devra’s visit has become a great gift to many now seeking political, cultural and religious freedom in China–it has taught them that they are not alone and has helped break the powerful lie told to them that their struggles count for nothing and go unnoticed.”

The full editorial can be viewed below:

Hangzhou, China
On Saturday, a colleague and I spent almost three hours at the No. 4 Prison here in the capital of Zhejiang province, about 200 kilometers southwest of Shanghai. This is the prison where longtime dissident Zhu Yufu is serving a seven-year term for writing a poem. Not an ode to the peony or lotus, of course, but an understated call for freedom that in China qualifies as a crime.

Among its 12 lines: “It’s time, people of China! It’s time./ The Square belongs to everyone./ With your own two feet./ It’s time to head to the Square and make your choice.” For this, the Chinese government imprisoned Mr. Zhu on charges of “inciting subversion.”

I am a physician and traveled to the prison at the request of Mr. Zhu’s family to determine his medical condition and evaluate whether he has any life-threatening problems. Information from Mr. Zhu’s family suggests that he is at risk of progressive heart failure and perhaps sudden death if not quickly evaluated and properly treated.

Since Mr. Zhu’s imprisonment in 2011, prison doctors have assessed his blood pressure once a month and given him one medication for hypertension and angina, and one herbal medication for heart failure. Mr. Zhu’s relatives told me months ago that he has a severe rash and has complained of chest pressure, severe headaches and back pain so acute that he was unable to walk without support.

Of further alarm were family members’ reports that Mr. Zhu had expressed feelings of despondency and had made predictions that he would die in prison. I find these accounts very worrisome. In my 40-plus years practicing medicine, I have seen patients give up and die. A key motivator for my trip was to let the Chinese government and Mr. Zhu know that there are people who care about him and are watching to see how prison authorities treat him.

On Saturday I hoped to examine Mr. Zhu and encourage his jailors to arrange a full cardiac examination for him. Prison officials denied all of these requests, saying they wouldn’t even inform Mr. Zhu that I had come to see him.

As I sat in the prison office with my traveling colleague Kody Kness, a Mandarin-speaking human rights advocate, the main guard was intransigent but pleasant. This lasted until, as we left the office, Mr. Kness took a cellphone photograph of the guard’s name plate, as he had no business card. At this point he roared out of his office, grabbed Mr. Kness’s phone and slammed the door.

After 45 minutes in a waiting area, we were taken into another office and queried about our attempts to see Mr. Zhu. Guards took and copied our passports, and some 30 minutes later Mr. Kness’s phone re-appeared with the offending photograph deleted (and the rest of its contents presumably compromised). Mr. Zhu’s wife, who accompanied us throughout our stay at the prison, repeatedly expressed the worry that something terrible might happen to us as punishment for acting on her husband’s behalf. We were allowed to leave the prison after two hours in custody.

On Monday, I went to the Bureau of Justice in Hangzhou—this time accompanied by a brave and distinguished Chinese lawyer, Professor Zhang Zanning —to appeal the denial of my right to examine Mr. Zhu or at least obtain assurance that he will be properly treated by a qualified cardiologist. Professor Zhang is preparing a formal petition for Mr. Zhu’s early release from prison based on his precarious physical and mental health.

Unfortunately, Professor Zhang was denied admission to the Bureau of Justice on the grounds that he needed to complete paperwork that he had already prepared. He is now appealing that denial and all other matters involving Mr. Zhu’s imprisonment and treatment.

Zhu Yufu has suffered greatly for his quiet advocacy of freedom in China, and his family has paid a heavy price alongside him. His wife, a retired pharmacist, has taken a job that in no way uses her professional training to support herself and their daughter, who as the child of a “criminal” has had difficulty finding work as an art teacher. Their son, a physicist, has had similar difficulty. Two of Mr. Zhu’s siblings have left comfortable lives in China.

China has been and aspires again to be a great nation. But it cannot make that claim as long as those who disagree with the government are imprisoned and deprived of their physical health and will to live.

Dr. Marcus, an internist, is a fellow of the American Academy of Physicians.