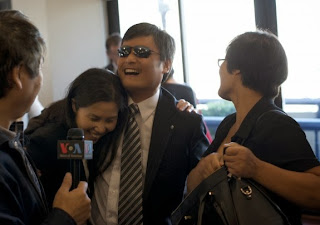 Blind activist Chen Guangcheng announced that he would be joining Catholic University, the Witherspoon Institute, and the Lantos Foundation for Human Rights and Justice. In the article by The Washington Post, Chen made it clear that his affiliation with these institutions does not represent his choosing sides in the American political arena. The full story can be read below:

A Chinese human rights activist, whose dramatic escape from his homeland last year made him an international celebrity, appeared Wednesday in Washington with officials of Catholic University and two other institutions to announce that they will jointly sponsor him and support his exile crusade against abuses by China.
The high-profile move came several months after Chen Guangcheng, who was previously sponsored by New York University, broke off relations with officials there after alleging that the university had come under pressure from Beijing to curb his activities. Critics of Chen, in turn, portrayed him as increasingly coming under the control of conservative Christian groups in the United States.

On Wednesday, Chen and his new sponsors rejected suggestions that there was any ideological or religious significance to his new ties. His two other sponsors are the Witherspoon Institute, a research center in Princeton, N.J., that promotes public awareness of democratic moral freedoms, and a human rights foundation named for the late Rep. Tom Lantos (D-Calif.). Chen, who is blind, will hold various posts as a fellow and adviser at the institutions and deliver a series of lectures at Catholic University, officials there said.

“We greatly admire Mr. Chen’s bravery in defense of human rights in China, and we welcome the opportunity to support him in his advocacy,” John Garvey, president of Catholic University, said at the National Press Club. He described the campus as diverse and nonpartisan and said he hoped that Chen would become a moral role model for students. He declined to discuss the funding sources for Chen’s new post.

Richard Swett, a former U.S. diplomat and official with the Lantos foundation, said he hoped that Chen could act as a “bridge” on human rights issues at a time of political polarization in Washington. “He is not aligned with one side or another,” Swett said. Views on U.S. policy toward China, a fast-growing U.S. economic partner, tend to be divided between pro-trade and human rights agendas. An official with Witherspoon disputed media reports that it is affiliated with the Catholic Church.

Chen, 41, who wore dark glasses and spoke in Mandarin through a translator, was cautious and euphemistic in his comments. He expressed his “sincere gratitude” to New York University and did not repeat his past criticisms, but he also said he appreciated the new help from institutions that would “not be intimidated by the powerful.”

Before breaking with NYU, where he was based for a year after fleeing from China with help from U.S. officials there, Chen and his American supporters — including Rep. Christopher H. Smith (R-N.J.) — said the university tried to muzzle him from speaking out under pressure from officials in China, where NYU is opening a branch campus. University officials strongly denied the accusation.

Some critics, however, suggested that Chen has become a captive of American conservative religious groups and institutions. On Wednesday, he was asked about rumors that a Chinese Christian activist, Bob Fu, had bugged his laptop or iPad as part of an effort to control him. Chen laughed when he heard the question translated but then added that U.S. law enforcement agencies had checked his electronic equipment and found it free of interference.

Fu, a pastor who is based in Texas, played a key role in arranging Chen’s escape from house arrest and dramatic departure from China. On Wednesday, he accompanied Chen and Chen’s wife at the news conference, and they chatted easily in Mandarin. In an interview later, Fu dismissed the bugging allegations as “nonsense.”

“Chen is a very discerning and determined person,” Fu said. “He has endured enormous pressure by the authorities in China, and he is not someone who can be easily manipulated or hounded. Anyone who thinks so is underestimating him.” Fu, whose Texas-based group ChinaAid helps underground Christian churches in China, was also in Washington to promote his new autobiography, “God’s Double Agent.”

Chen, who was in a Chinese prison for four years for anti-government activities, is known for his crusade against forced abortions under Beijing’s harsh population-control policies, a campaign that drew acclaim and support from Christian and religious rights groups in the United States.

At the news conference, he did not mention the issue of forced abortion but instead referred more broadly to his plans to fight for “democratic freedoms” in China and expose the “indescribable brutality” of its communist rulers. In a later interview, however, he said he intended to continue monitoring abortions and was investigating a report of a woman who was forced to have an abortion even though she was nine months pregnant.

Chen also did not mention the issue of religious freedom in his formal remarks but said later that although he does not have any particular religious affiliation, he believes in freedom for all religions, including Tibetan Buddhists who are persecuted by China. He said that U.S. moral principles “should not be sacrificed to economic relations” with China.