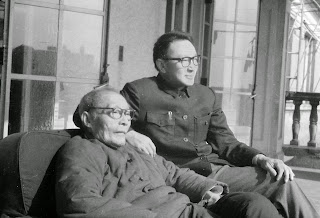 BEIJING — Six decades after Y.T. Wu founded an organization used by the Communist Party to control churches in China, his son is suing the government to get Wu’s diaries back in hopes of rehabilitating his image among the many Chinese Christians who despise him.

To this day, the vast rift caused by Wu’s organization defines China’s churches. Among the booming unregistered churches, he is vilified. Some worshipers call him a Judas who delivered China’s Christian community into the hands of the Communist government and abetted the persecution of hundreds of thousands of Christians.

Yet in government-sanctioned congregations, Wu is revered for creating theThree-Self Patriotic Movement in charge of all Protestant churches.

Since Wu’s death in 1979, these dueling legacies have haunted his son, Wu Zongsu. Now 84 and in the twilight of his life, the son is spending his final years and a small fortune trying to piece together a more nuanced portrait of his father.

The key to that, however, lies in a 40-volume collection of diaries that the younger Wu says he lent to the Communist Party days after his father’s death and has been unable to recover.

Wu thinks that if church scholars could access his father’s early writings, they would understand his original vision for China’s churches — a vision he says the Communist Party later twisted to suit its own purposes.

In a phone interview from San Francisco, where he now lives, Wu called the lawsuit against China’s government a last-ditch effort that has slim chances of succeeding.

“I don’t have much time left, and there is no one after me to do this work,” he said. He is the last remaining heir and has no descendants. “Some call my father a prophet; others say a betrayer. But the truth is he was just a man, a very complicated one.”

Wu was in his 20s when his father began the Three-Self Patriotic Association in the 1950s. China’s Communist leaders had finally won control of the country, expelled all foreign missionaries and set up an atheistic government.

At the private urging of China’s premier, Zhou Enlai, and after meetings with Party Chairman Mao Zedong, Y.T. Wu — also known in China by his full name, Wu Yaozong — spearheaded the establishment of a national church that would be free from foreign influence and completely loyal to the new Communist government.

The resulting organization took its Three-Self name from its principles of self-governance, self-support and self-propagation of the Gospel.

Congregations that submitted to the organization’s authority were allowed to carry on; those that did not were declared enemies of the state. In the ensuing years, thousands of people were arrested and imprisoned, according to church historians, as Christian worshipers, churches and pastors were encouraged to inform on each other.

With the late-1960s Cultural Revolution, registration became moot. All religion in China was banned, and even previously state-backed church leaders were sent to labor camps, Y.T. Wu among them.

But from that repression emerged a thriving illegal underground church movement, whose growth outpaced that of the government’s Three-Self churches when they were restored in 1979.

A bitter rift between China’s official and illegal churches has existed ever since.

A government think tank in 2010 pegged the number of Chinese Protestants at 23 million, but outside experts estimate an additional 35 million belong to the enormous underground churches.

To this day, many in the underground churches as well as overseas Chinese Christians question the motives of Wu’s father for creating a state church and ask whether he even believed in God.

Wu argues that while his father was flawed, he was an idealist who subscribed to the mistaken belief that Christianity could coexist with the Communist government, rather than be controlled by it.

During the Communist revolution, Wu notes, party leaders spoke of many of the same ideals as Christians — equality, people’s rights and values. “My father saw Communism and Christianity as two sides of the same truth — in pursuit of the same goal, a better society.”

The son said he became disillusioned with Communism in 1989, when Chinese troops opened fire on Tiananmen Square activists. He was teaching at the time at a university in San Francisco and decided to remain there.

With the 60th anniversary of the founding of the Three-Self association approaching, Wu has pushed his more favorable view of his father in personal meetings and at academic symposiums.

He said he has spent $100,000 — his and his wife’s life savings — to help a Hong Kong professor collect what remains of his father’s speeches and writings from throughout China. (They hope to publish the collected works at the end of this year.)

He also wrote a 60-page paper on his father’s beliefs and work that caused ripples of controversy among scholars when it was published four years ago. Based on his father’s writings and his own recollections, the work is surprisingly unsentimental and unsparing in parts.

Only the title betrays Wu’s sympathies: “Fallen Flower, Ruthless Waters.” The flower refers to his father, Wu explains, the waters to the party.

But all that work pales in comparison to what could emerge from the diaries his father kept, Wu said. Beyond their importance in explaining his father’s intentions, Wu and scholars say, the diaries could yield valuable insights into a crucial era of China’s church history.

Wu has petitioned various departments within the Communist government for years without a response. The closest thing he received, he said, was an indirect explanation from leaders in the Three-Self movement that because his father is a historical figure, his diaries were now considered state property.

When Bob Fu, founder of the Texas-based Christian rights group China Aid, invited Wu to speak at a San Francisco conference this year, one of the most prominent leaders in the Chinese Christian community refused to attend.

Fu said the leader quoted the Bible, “A good tree doesn’t produce bad fruit,” and pointed to the imprisonment of innumerable Christians in China that followed the creation of the Three-Self association.

But at the conference, Fu said, many appeared disarmed by Wu’s sincerity and willingness to criticize some of what his father did.

“I still think his portrayal of his father as a tragic figure may be an overly gracious assessment,” Fu said. “But there’s probably some truth to both sides.”

Views are also softening among some in the underground church, with the emergence of a new generation of church leaders who never experienced the persecution of earlier decades, said a pastor from an unregistered church in Beijing.

Rather than a villain, Wu’s father is now viewed by some as a man who — for better or worse — was used by God as a tool during that era to strengthen churches in China.

“How you see Wu Yaozong depends on how you view the Three-Self church he created,” said the pastor, who spoke on the condition of anonymity. “And opinions are beginning to change as the church itself changes.”

Liu Liu contributed to this report.