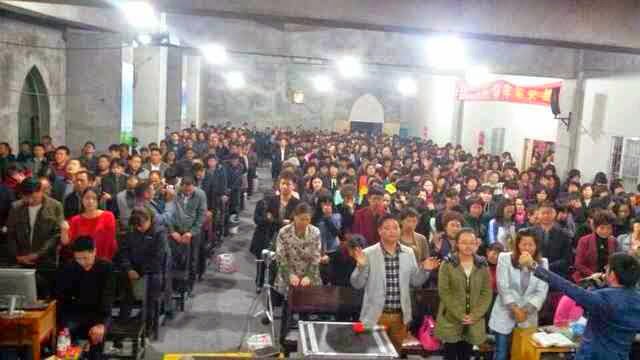 
(Wenzhou, Zhejiang—April 25, 2014) Thousands of Christians convened once again at Sanjiang Church in Wenzhou, a town in the coastal Chinese province Zhejiang, on Tuesday to pray and protect the church from the forced demolition it is once again facing despite a previous agreement between the church and the government.

Since this round of persecution began on Monday, several believers have been detained or monitored in relation to the standoff between the church and the Wenzhou government (https://chinaaid.org/2014/04/sanjiang-church-in-zhejiang-facing.html).

However, there is some speculation that this campaign originated in Beijing.

China Aid reported that on Monday afternoon, authorities surrounded Sanjiang Church with a variety of vehicles, including heavy machinery for demolition, buses to haul away Christians and news vans, and personnel such as riot police and SWAT officers. This news came in spite of an agreement between the two groups signed on April 7, which called for the demolition of two stories of an accessory building (https://chinaaid.org/2014/04/one-tspm-church-in-zhejiang-finds.html).

Christians were blocked from accessing the church, and major intersections in the area were barricaded. In addition, communication signals in the area were cut off to prevent believers from contacting one another and foreign media.

“It was always raining [on Monday]. That’s why the government didn’t make the move. They only left the lights on as if they were going to demolish the building,” a church member said. “Meanwhile, the police officers on both sides of the road watched menacingly, as if they were waiting for the final order [to begin demolition]. Churches from various places have delivered some food at the church…because several thousand people…were waiting there.”

“We launched a joint effort on the web, and believers from various places are appealing [on the church’s behalf]. Christians from various churches in Wenzhou arrived group by group at night,” a second Christian said.

“The people here in our church are praying,” another believer said. “Most believers have come to support us. At this moment, the government hasn’t done anything, and the church’s stand is it absolutely doesn’t want the demolition. If the government has a regultation written or it has notice, we will give them an open letter. However, they must give us legitimate reasons.”

However, believers are reporting that the government hasn’t given up despite the influx of approximately 3,000 Christians, who are guarding the church inside and out, in response to pleas for support from church members. “[The government] has always been up to something. In Sanijang Church, the local government is trying to deal with ordinary people first,” one person said. “They went to the believers in their homes, one by one. They are trying to persuade the believers through personal emotions or pressure them by invoking government policy. It is said that they government wants to change Sanjiang Church to a site for public activities.”

“The situation now in Sanjiang Church is leaders, pastors and co-workers from various churches have arrived, and once they have reached a consensus, they will make some arrangements, including moving the pulpit out of the church. Now, the chief consensus…is that we need more people to come here,” Mr. Zhou, a believer inside Sanjiang Church, said.

“We don’t mean to fight the government [by gathering] here, but we want to say that we are protecting our church properties and our cross,” Zhou said.

Wenzhou-area house churches issued a letter, asking that believers participate in a fasting prayer that lasted from Monday to Wednesday. People taking part were asked to skip on meal a day to focus on prayer.

As a result of the community-wide support, officials are impersonating Christians on various media platforms, claiming that all is well in the area and that believers no longer need to concern themselves with Sanjiang Church’s wellbeing.

Several detained, monitored
China Aid learned that several people at Sanjiang Church in Yongjia County were detained between Monday and Tuesday. Additionally, several Christians from surrounding counties and cities in Wenzhou are having their electronic communication monitored.

Monday night, authorities took Guo, an elder at Sanijang Church, into custody. At 5 p.m. on Tuesday, a deacon named Daozhen and a Christian named Guoguang were taken into custody as well. So far, there is no news on any of the Christians.

Some believers are reporting that the government has offered to release the detained church members if the other Christians will sign an agreement, which would allow the government to demolish the church.

Another believer, Fu Gangqiao was summoned and released by police Wednesday after spending several hours in interrogation. Police checked messages on Fu’s phone and told him they would check again later in the day. One believer said that after coming home, Fu was absent from social media.

Wu Jiale, another church member, had his cell phone confiscated by police.

It was reported that police in other parts of Wenzhou, such as Rui’an City and Pingyang County, summoned local Christians to the public security bureaus under suspicions of spreading news to foreign sources. Zheng Leguo, a church leader from Wenzhou, reported that three believers in Pingyang County were summoned to the public security bureau for passing photos of Christians in Wenzhou to news outlets.

“People were not only taken away in Pingyang, but there is news from Rui’an that some believers were summoned by police,” Zheng said.

Persecution in other areas of Wenzhou, other cities
Since the beginning of March, churches across Zhejiang have been threatened. Sanjiang Church received their demolition notice on April 3.

“The government is determined to demolish the building,” a Hangzhou-area Chrisitan said, noting that the situation across Zhejiang is not optimistic at the moment.

On April 16, government officials met with Christians at Qianpan Church in Yueqing County, Wenzhou, where they told believers that the church was an “illegal structure” and ordered the church to demolish it within 24 hours.

Church members, whose number in full force equals about 100, gathered together to guard the church, much like what is being done at Sanjiang Church now.

Another small house church in the Lucheng District of Wenzhou received a demolition and relocation notice in mid-April as well. “Our church and Sanzheng Church, [another local church], have already received a notice. In the entire Lucheng area, we have published some joint declarations. That’s why the government hasn’t done anything significant so far.” Sanjiang Church also published declarations (see https://chinaaid.org/2014/04/zhejiang-letter-of-prayer-to-all.html and https://chinaaid.org/2014/04/wenzhou-christians-address-zhenjiang.html).

Also in mid-April, several churches, including Rui’an Church, Yueqng Church, Cangnan Church and Lucheng Church, published the “Joint Declaration regarding the Government’s Forced Demolition of Crosses and Churches” in which they called for support from the worldwide Christian community and urged the government to stop the forced demolitions. So far, more than a thousand people have added their names to the declaration.

Christians in Pingyang County reached a 5-point consensus on Wednesday about the “Three Rectifications and One Demolition” campaign. They agreed that the crosses and church buildings absolutely must not be demolished. Leaders also agreed to quit their positions in the Chinese Christian Congress and Three-Self Patriotic Movement should demolitions be carried out by the government.

“We would never demolish it by ourselves, and we would never let them demolish it. If they have a regulation that they call an administrative order, then we can appeal. Now, we have hired legal counsel. We are willing to deal with them through legal channels. So far, all of their conducts has been legal,” Mr. Wang, a church pastor from Rui’an, said.

Another pastor said that the forced demolition of Sanjiang Church’s accessory building floors may have been an order straight from Beijing: “This is super strange. Maybe it is part of the overall plan from the central government. However, to carry it out, they will meet a lot of resistance. The government should really have a different way of thinking. This is their consistent policy.

“Christianity has grown too fast, and its effect on the society is gradually increasing. That’s why the government wants to do something about it. However, it is not easy. If things really go their way, it will cause conflicts between the people and the government.”

“This attempt for the imminent forced demolition of Sanjiang Church represents a further, serious escalation of religious rights persecution in China,” Bob Fu, China Aid’s founder and president said. “The massive presence of military police at the church and the arbitrary detention of church leaders shows that the central Beijing government has been actively involved in decisions regarding the new wave of attacks against churches in Zhejiang and other provinces. We urge the international community to seek immediate intervention to stop these barbaric acts.”