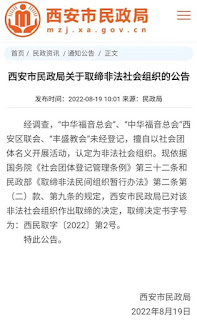 (Xi’an, Shaanxi province— October 26, 2022) On October 17, the Church of Abundance in Xi’an issued a public prayer letter stating that two pastors and a fellow Christian have been secretly detained for 60 days and that no one has heard from them.

On August 17, the Shilipu police station in Xi’an took away Pastor Lian Changnian of the Church of Abundance on the grounds of “fraud” and placed him under residential surveillance in a designated location along with Lian Xuliang. A third Christian, Fu Juan, has also been detained under unspecified charges. Thus far, the three have been detained in a location designated by the government. Furthermore, in over 60 days, many female church members have been repeatedly summoned by authorities. Some of them were abused, threatened, and beaten.

At around 11 PM on the evening of August 18, the Chanba Ecological Public Security Branch of Xi’an Public Security Bureau imposed designated residential surveillance on Pastors Lian Changnian and Lian Xuliang on suspicion of “fraud.” The official notice states that they were to be placed under residential surveillance at their own residence. However, so far, the family members of the two pastors still do not know the whereabouts of these two pastors or where they were taken for residential surveillance. After 23:00 that night, Guo Jiuju, Zhang Jun, and Xing Aiping were released and went home. Preacher Fu Juan’s whereabouts are also unknown, and her husband has not received an official written notice of her arrest.

On August 19, the Xi’an Civil Affairs Bureau issued an announcement that the Xi’an Church of Abundance was officially banned.

That is to say, according to criminal proceedings, residential surveillance in a designated location is only possible when a criminal suspect is regarded by law enforcement as one who endangers national security or is suspected of terrorist activities. In criminal investigations, it is rare for law enforcement officers to prosecute pastors and other church leaders for such crimes.

This intercession letter was sent in the names of Pastor Lian Changnian’s wife, Pastor Lian Xuliang’s wife, and Sister Fu Juan’s husband. The intercession letter states that it is the duty of Christians to gather together to worship. For more than 2,000 years, no law has determined that this would constitute a crime. Even Chinese law does not prohibit Christian family gatherings. At present, lawyers Zhang Kai, Zhao Binghao, Liu Anqiang, Ding Junjie, Zhao Wenjing, and Li Chunfu are involved in the case.