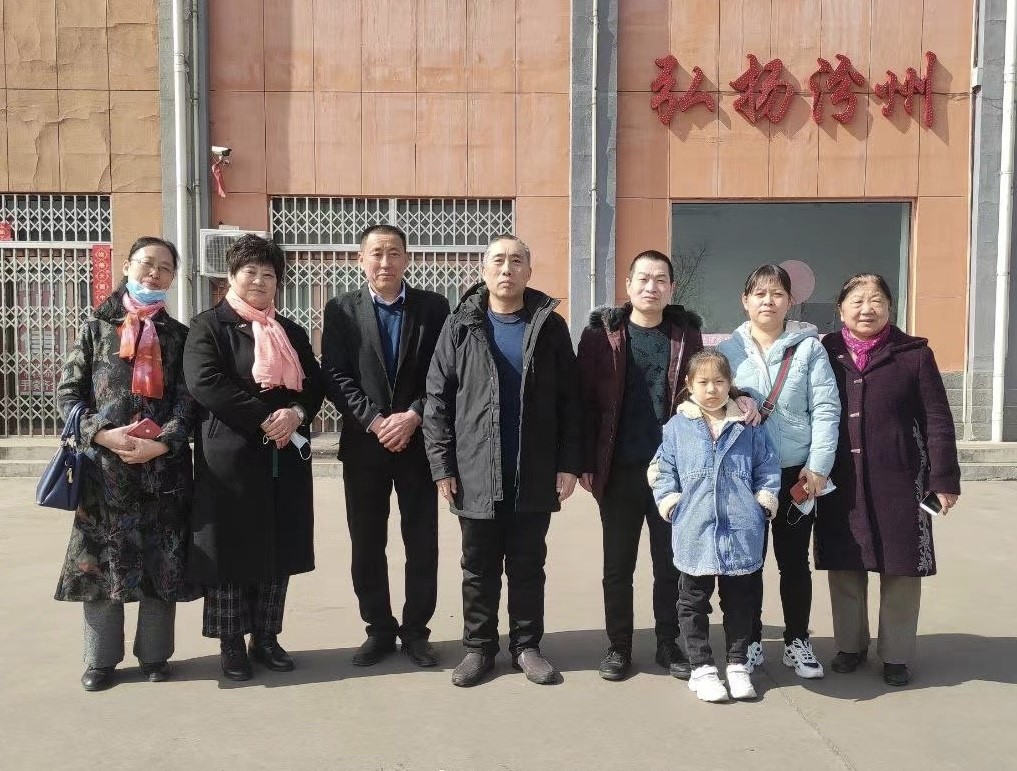 (Shanxi province, China— March 1, 2022) On February 27, Christians Zhang Yaowen and Wang Shiqiang were released from prison. They were sentenced to seven months by Fenyang People’s Court under the charge of “illegally crossing the national border.” However, they both traveled to Malaysia using valid passports and visas. Their family members and Christians of Taiyuan Zion Reformed Church went to the prison to pick them up. They took pictures in front of the prison. They both look very peaceful in the picture.
Another 3 Christians were arrested and sentenced at the same time. Song Shoushan, who was sentenced to six months, was released on January 27. Zhang Ligong and Wang Runyun were sentenced to eight months. They are expected to be released on March 27.

Zhang Ligong, Wang Runyun, Wang Shiqiang, Zhang Yaowen, and Song Shoushan are all co-workers of Taiyuan Zion Reformed Church. In 2020, they traveled to Kuala Lumpur (Malaysia) from January 28 to February 3 to attend the “Gospel and Culture Conference 2020” that Pastor Stephen Tong Tjong Eng organized. During the morning of July 28, 2021, local police criminally detained the five under the charge of “illegally crossing the national border.” Later, authorities formally arrested them.

Pastor Tong, an international, influential Chinese pastor who hosts conferences that attract Chinese Christians from all over the world, openly criticized the Chinese Communist Party (CCP) for its religious persecution. To retaliate, the CCP banned his sermons in China.

On December 28, 2021, when Fenyang People’s Court held a trial for the five Christians, the court charged each with “illegally crossing the national border.” Officials allowed lawyers and family members to attend the court session.

According to the procuratorate:

An Yankui of Taiyuan Zion Reformed Church told Wang Runyun that the “Gospel and Culture Conference 2020” will be held in Kuala Lumpur (Malaysia) on January 28, 2020. Then Wang Runyun told the news to Zhang Ligong. After discussion, they decided to send Zhang Ligong, Wang Runyun, Wang Shiqiang, Zhang Yaowen, and Song Shoushan to attend the conference. Wang Runyun was responsible for visa application, flight tickets purchase, and so on. On December 8, 2020, Wang Runyun applied for a tourist visa on the “Window Malaysia” website and received an official eVISA issued by the Malaysian government the same day. On January 27, 2020, they boarded a flight at Xianyang International Airport and landed at Kuala Lumpur International Airport on January 28. After attending the conference, they came back to China through Xianyang International Airport on February 3. They severely violated the “Exit-Entry Administration Law of the People’s Republic of China” and article 322 of the “Criminal Law of the People’s Republic of China” because they used fabricated reasons to acquire exit-entry certificates. Thus, they are criminally charged with “illegally crossing the national border.”

They exited and entered the country border legally, so they did not violate the “Exit-Entry Administration Law of the People’s Republic of China,” and they did not cross the national border illegally. Attending the “Gospel and Culture Conference 2020” was part of their trip. It is not specified by law that attending religious activities in a foreign country is prohibited. Besides, attending the conference did not bring harm to anybody. So, they should not be charged with “illegally crossing the national border.” It is completely legal for them to attend religious activities in a foreign country. They should not be charged. Thus, I request the court to drop the charge and release them.

The court did not announce the judgment during the trial. The defendants, though, shared the gospel with the officiating judge.

On January 7, the family of the five Christians received the verdict issued by Fenyang People’s Court on December 31. They were all formally charged with “illegally crossing the national border.” Their punishment included:

Song Shoushan was released one month ago. He lost some weight, but he was very peaceful. He told his family that they experienced God’s grace in the prison and shared the gospel with other prisoners. There are many broken people in the prison, and they all need the gospel. He said the other four Christians are all well.

On November 21, 2021, another two Christians of their church, An Yankui and Zhang Chenghao, were also arrested under the charge of “illegally crossing the national border.” They have been formally arrested on December 29. No date has been set for their trial yet.