(Yushu, Jilin–Nov. 26, 2012) An official Three-Self church in northeastern China has been denied permission to stage a public protest against the planned illegal eviction and demolition of their church property by real estate developers working hand-in-glove with the local government.

Since 2010, the Chengjiao Street Three-Self Church in the city of Yushu, Jilin province, has been trying to reach an agreement with the developers who want to demolish their property.  But because of the collusion between the property developers and the local government , the church has been unable to reach an acceptable agreement.  Furthermore, the church and its members have been the target of threats and harassment.  When church members tried to submit a formal complaint to the government in accordance with the law, they were blocked at every turn.

For more details, see our earlier report at https://chinaaid.org/2012/09/a-tspm-church-in-yushu-city-jilin.html 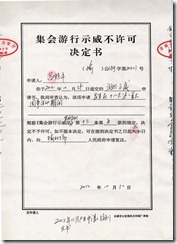 Among the most egregious incidents was the beating of two women believers by the developers on July 20.  In the three months following the attack, church members tried repeatedly to submit their complaint to various relevant government departments.  But the Yushu offices of various national-level government departments refused accept the complaints about the victims’ medical bills and compensation, and also would not carry out their legal responsibility to investigate the criminal liability of the suspects and their illegal infringement of rights.  Having no other recourse, church representatives in October applied for a permit to stage a protest march during which they would "bear six banners with slogans…make speeches along the way and shout slogans."  Their application was rejected by the Yushu Public Security Bureau (see scan of the document; click to enlarge).

After Christian lawyers in Beijing were asked to intervene, a church member representing the majority of the congregation submitted an application for administrative review, seeking a decision on the legality of the Public Security Bureau’s Oct. 30 "Notification of Rejection of Permit for Protest March."

According to sources, the developers’ outrageous behavior and the government’s openly siding with the developers are because the two parties have already formed an interest group that enjoys the behind-the-scenes backing of the Yushu mayr, Zhao Guojun.  His cellphone number is 13804390506

The Christians in this church are putting their faith in the Lord’s grace and are determined to let the Lord Jesus Christ keep accounts.  They will steadfastly adhere to the law in protecting their property rights, freedom of religion and human rights.  They hope that believers in China and in churches around the world will stand in solidarity with them and support them.

ChinaAid strongly condemns the Yushu government and the property developers for their series of illegal actions to harm others and benefit themselves and their evil violent acts.  ChinaAid calls on the provincial government to intervene in a timely manner so as to avoid an escalation of the situation.  At the same time, ChinaAid calls on all the house churches in China as well as Three-Self churches that have not bowed down to Baal to support and pray for the Yushu Chengjiao Street Church.