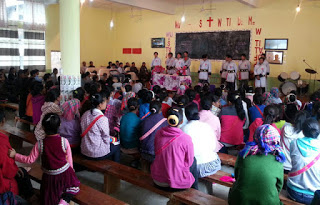 Three-Self Church is shut down again

(Xining, Qinghai—Jan. 14, 2020) Just after noon on Christmas Day, the power to Donghu Church was cut off during the service. All members of the delegation had to leave in the darkness.

According to church representatives, Ms. Anna and Ms. Wang Ruiqin, the fire department found an excuse to seal the church door in early December.

Nevertheless, on Dec. 15 and Dec. 22, more than two hundred followers in the Donghu Church have been worshiping by entering through the window of the building.

Donghu Church has now received a formal notice requesting immediate closure and will be demolished on January 2, 2020.

The church was approved by authorities in 2003 and has since become a Three-Self Church by meeting the official requirements. It is the oldest and largest church in the Western District with more than 300 members.

This is not the first time that the Xining municipal government has tried to close the Donghu Church. In Dec. 2017, the fire department had closed the church using the excuse of a “hidden danger.” The authorities later suspended the order.

After this event, the church purchased a new building in the Haihu New District of the Western District in full in early 2018.

However, in April 2018, when the church applied for relocation, it was denied by the Xining Religious Bureau citing the address was inappropriate. The Bureau rejected and obstructed the renovation. So far, the church has been vacant for more than two years, incurring high property costs with each year.

Since the Xining Municipal Government did not approve the church’s new building, the authorities insisted on selling and repurchasing it.

Forced to relocate again, the members began to meet at the Donghu Hotel. It is not authorized to meet in a hotel because the meeting will be considered illegal by authorities. Thus, paving the way for the ban.

The experience of the Donghu Church is a testament to the Chinese government shamelessly exhausting all efforts to shut down churches and persecute Christians. The Three-Self Churches are not exempt from the crackdown despite having government approval.