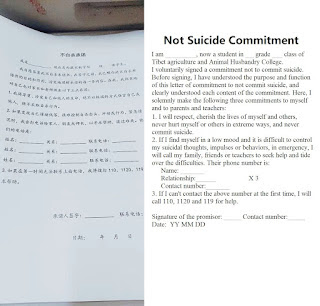 Tibetan students forced to sign a “No Suicide Pledge”

(Tibet—May 20, 2022) After the famous
Tibetan singer Tsewang Norbu passed away from self-immolation in front of the
east of Potala Palace, the capital of Tibet, on February 25, police harassed
and beat his father, forcing him to commit suicide. The CCP authorities have since
forced students at a local university to sign a “No Suicide Pledge,” fearing
that Tibetans would self-immolate in protest.

A data report by the research center of the
Central Tibetan Administration shows that since 2008, there have been about 158
incidents of self-immolation by Tibetans.

The official Twitter of the Great Translation
Movement recently reported that after Tsewang Norbu self-immolated, the
students of the Tibet Agricultural and Animal Husbandry College were forced by
the CCP authorities to sign a “No Suicide Pledge” and were asked to “never
commit suicide.”

The
Voice of Tibet reported that the Chinese government often used “personal
factors” as an excuse to distort the facts of Tibetans’ self-immolation
protests against the CCP’s tyranny. Authorities distorted and publicized the
Tibetan self-immolation protests as “Mental Health Disorders.” In the “No
Suicide Pledges,” students of the Tibet Agricultural and Animal Husbandry College
were asked by the Chinese authorities to provide names and phone numbers of
emergency contacts. This is an indication that the CCP authorities portrayed
the self-immolation protests by Tibetans as stemming from personal emotional
factors, which resulted in the loss of hope in life which ultimately resulted
in suicide.

After Xi Jinping came to power, he forcibly
pushed for the popularization of Putonghua (the Chinese Language) in Tibet. Xi
closed Tibetan language schools and banned the use of the Tibetan language in
schools. He went on to implement official Chinese remedial classes to teach
Chinese Law and the history of the Communist Party’s revolution. Schools in the
Tibetan region were matched with police supervision. Surveillance permeates
almost every level.

Tibetans have reacted strongly to China’s
current policy of replacing the Tibetan language with Chinese. The shared
sentiment among Tibetans who have self-immolated recently is the emphasis on
writing in Tibetan. Tsewang Norbu insisted on signing his signature in Tibetan
when he participated in the reality show “Sing! China,” which aroused the
dissatisfaction of the relevant departments. The 81-year-old Tibetan man Taphun
who self-immolated in a protest against the Chinese government’s oppression was
particularly concerned about the use of the Tibetan language during his
lifetime and believed it to be a matter of Tibet’s survival.

This “No Suicide Pledge” targeting Tibetan
students reflects the authorities’ non-remorseful attitude toward the harsh and
repressive policies of the Tibet Autonomous Region. It indicates their lack of
desire to be held accountable and their failure to find a solution to the root
cause of Tibetans’ resistance.