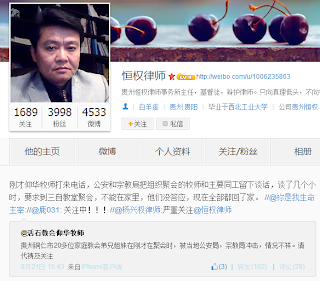 Workers from the religious affairs bureau and local police in the city of Tongren, Guizhou Province interrupted a house church gathering consisting of more than 20 members, according to the social networking site of a Chinese human rights lawyer. The officials detained the preacher and other house church members who had organized the gathering. The officials demanded that the preacher join the Three-Self Patriotic church; however, the preacher and other church members refused. After several hours of talking, the preacher and other church members were released.
In search of help, members of the church sent out news of the disturbance. The news spread quickly via Wiebo, a Twitter-like Chinese social networking site. Because of this, many fellow Christians were praying over this event all at once. “The church can be killed, but it cannot be merged,” Wang Yi, a house church preacher, said. “It is insatiable to force one company to join another one; it is evil-doing to force one church to join one company… However, we should thank God, because he never gives sufferings which his children cannot bear, and he never lets his children drink from the cup which they need not drink.” Wang used “company” to refer to the Three-Self Patriotic Movement.

Christianity has a long history in the city of Tongren. In 1912, the first missionaries, Bai Daoqi and Ke Maolin, came to Tongren along the Chen River from the U.S. From 1912 until 1949, there had been a total of 26 missionaries in Tongren. These missionaries built four churches, a church hospital, three clinics, an elementary school and a middle school.