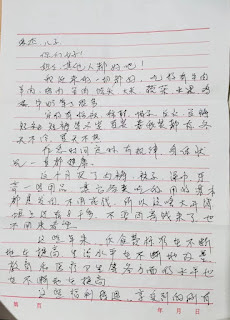 (Xinjiang, China—August 2, 2022) After four years of preventing his family from meeting with him and denying correspondence for two years, Zhang Haitao’s family recently received another letter from him in prison.

Zhang was sentenced to 19 years in prison by authorities for “probing and illegally supplying intelligence abroad” because he posted 69 WeChat messages and took 13 photos of the streets of Urumqi in an effort to promote freedom, democracy, and human rights.

Li Aijie, Zhang’s wife, issued a strong appeal on her Twitter account, requesting authorities to allow his family to meet with him and asking for international support.

The family last met with Zhang on April 26, 2018, in Xinjiang Shaya Prison. Since Zhang Haitao’s sister last met with him four years ago, Shaya Prison has not allowed the family to meet Zhang Haitao for various reasons. Even when they received letters from Zhang Haitao, there were only a few words on there. Zhang Haitao’s sister, Zhang Qingzhen, received a letter from Haitao at her home in Henan in early July. Zhang’s wife Li Aijie said: “for more than four years, (authorities) did not allow meetings; my heart is wrenching in pain as I hope for his letter.”

In a letter dated June 27 to his family, Zhang Haitao said, “everything has been good for me lately,” “no need to send money,” and “no need to come to visit.” He specifically cited his food and clothing, saying, “food is good; there is beef, mutton, chicken, fish, steamed buns, rice, vegetables, fruit, eggs, milk, and many others.”

“Over the years, the standard of food has been increasing, the standard of living has been improving, and the level of education and health care has also been rising. [I] have enjoyed all these benefits and rights,” Zhang Haitao added.

His wife Li Aijie, who now resides in California, does not doubt that this is her husband’s own handwritten letter, but she raised questions on whether the content of his letter came from his original intention, stating, “since everything is fine and his life in prison is better than the life of people on the outside, then why has the family not been allowed to meet him?” These words in the letter, which defy common sense, caused her to worry whether Zhang Haitao was being treated inhumanely in prison.

She said: “I seriously suspect that Zhang Haitao is being subjected to inhuman abuse and torture in prison!”

Mr. Meng Yuanxin, a pro-democracy activist who is knowledgeable about China’s prison environment, said, “Improved meals are usually provided during festival periods such as New Year’s Eve, New Year’s Day, and Mid-Autumn Festival; the meals may be improved by providing some meat and maybe even dumplings, but on the norm, the food is usually very terrible.”

Zhang Haitao’s letter also mentioned that he still has more than 8,000 yuan in his account, to which Li Aijie commented: “My judgment is that the prison authorities did not allow him to spend the money. And he even said not to visit him. Is this the normal psychology of a person in solitary confinement?”

She said that Zhang Haitao knows very well that he is innocent and was unjustly sentenced to 19 years by the Xinjiang authorities for speaking out for the human rights of Xinjiang people. She wondered how it would be possible for him to thank the Party, the country, and the government.

“After my sister and I visited him that year and confirmed that he was held in solitary confinement; forbidden to be released outdoors, I couldn’t imagine what little freedom he could still enjoy, and they held him hostage with that limited freedom. It is heart-wrenching to think about that,” she shared.

As to whether the content of Zhang Haitao’s letter originated from his own intention, pro-democracy activist Meng said, “I am almost certain that in this kind of situation, it is written in advance by the police, and Zhang Haitao is forced to copy it down. This is more commonly seen, and the police also feel that this is the simplest; otherwise, if the person is forced to write sentence by sentence, and if it is written in an unsatisfactory manner that needs modification, it is then particularly laborious. Having a written copy to copy only once is then better.”

This letter from Zhang Haitao’s family shows no information that may suggest his intent to communicate with his family, and the content of the letter reads more like relieving the outside world’s concerns about the human rights situation and living conditions in the prison. Zhang’s family members have become disheartened as a result. Li Aijie asked herself, “Under what circumstances did he write these words that were not of his own will? She said it is “too horrible to contemplate.”