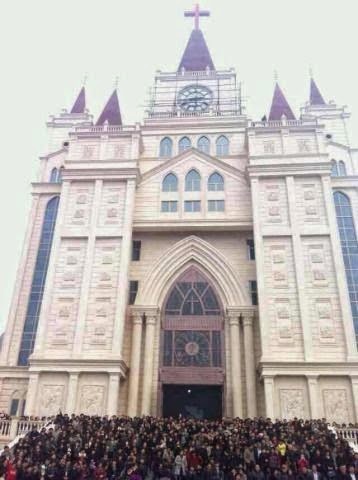 Last week, Tim Phillips, writing for The Telegraph, reported that thousands of Chinese Christians are mounting an extraordinary, round-the-clock defense of Sanjiang Christian Church in Wenzhou, China. The Christians, including the elderly and, in some cases, disabled women, have now occupied the church to prevent demolition teams moving in and bull-dozing the church. The 24-hour guard began when a demolition notice was posted last week on the newly-constructed church that took six years to build and cost up to 30 million yuan (approximately $4.8 million). Construction costs for the church were donated by local families, many of whom have children living abroad. Reportedly, the children also donated substantially for the church’s construction. Chinese Communist officials declared that the church had been built illegally and posed “serious safety risks,” and further used red paint against the towering white façade to write “Demolish” and “Illegal construction.” However, church officials said that the construction plan and design was approved by the Wenzhou municipal government, and in fact, was cited as a “model project” by the local government when the church was completed late last year. The presence of an estimated 1,000 police, along with SWAT teams, and the arrival of bulldozers at the church triggered an angry, but non-violent, response among Christians in Wenzhou, a port city known for its large and vital Christian community. (A link to a short video showing the church defenders congregating on the church steps is available here.)

Wenzhou, a wealthy city of seven million residents, is a major port south of Shanghai. Some have estimated that 15 percent of the city’s population are regular church-goers, the majority of whom are Protestant. Church members believe that their church was targeted after Xia Baolong, the provincial Communist Party chief, visited the region in January, and was upset by the prominence of a church built to accommodate thousands of Christian worshippers. (Apparently, he was also offended that the church building and the cross atop it are too tall and visible for his socialist paradise.) According to a Chinese government website, provincial officials then began a campaign in February to demolish any church buildings that violated local regulations. Government officials are deeply concerned that Christianity is growing too fast and in an “unsustainable” manner. (I am reminded of Pliny the Younger’s letter to the Roman Emperor Trajan in the early part of the second century A.D., asking for advice on how to deal with the Christian “superstition” that had infected the Roman provinces of Pontus and Bithynia. Pliny writes, “For many persons of every age, every rank, and also of both sexes are and will be endangered. For the contagion of this [Christian] superstition has spread not only to the cities, but also to the villages and farms.” For the exchange of letters, please see the following link.) Regular readers of Touchstone and Mere Comments know that most Christians in China worship in underground house churches. China’s house church movement, which comprises approximately 90 percent of China’s Christians, endures unimaginable persecution, and the Christians are subject to regular crackdowns because house churches refuse to comply with Communist Party rules. During one crackdown in 2000 in Zhejiang province, where the city of Wenzhou is located, hundreds of churches and temples were demolished. However, what is unusual about this dispute is that the Sanjiang Christian Church is obviously not a house church, but is registered with the local government.

Despite threats, church officials have refused to take the cross down. In an interview with The New York Times, Li Xile, said, “We are not taking the cross down. It is a symbol of our love. A church without a cross is just a warehouse.” Wang Jianfeng, one of the people gathered on the church steps, said in a recent interview, “[Mr. Xia Balong’s] behavior is illegal. He has abused his power. The construction of the church is not against the law.” A representative of the local government, Zhang Biyao, denied that the Communist Party was persecuting Christians. Ms. Zhang said, “[The Christians] can believe. This is free. We can’t control them.” But she said that the church was illegally built and was structurally unsound. The local government merely wants to protect the “people’s safety.” (Yes, it is always for the people’s good, isn’t it?)

Today, China’s human rights record is among the worst in the world, and China’s government is among the most vicious opponents of the Gospel of Our Lord Jesus Christ. In 1949, Mao Zedong declared the establishment of the People’s Republic of China, and quickly sought to purge society of anything that would point to religion, causing China’s people to endure great hardship. Mao’s Great Leap Forward in the 1950s and the Cultural Revolution in the 1960s and 1970s, left tens of millions of Chinese dead or victimized. China’s system of “re-education” through labor camps detains hundreds of thousands each year without any hearing. China’s “strike-hard” policy is presented by the government as a crackdown on criminals, but it has been hardest on Christians. Today, through “strike-hard,” more Christians are in prison or under some form of detention than in any other country in the world. Yet, the Church in China grows, with thousands of Chinese coming to Jesus Christ every day. While Chinese Christians endure great persecution, it stands strong in its commitment to preach the Gospel of Christ no matter the cost. Please pray for the Christians of China, and in particular, for the worshippers at the Sanjiang Christian Church, and for a peaceful resolution to this dispute. If you wish to write to the Chinese Ambassador to the United States, you can write to him at the following address: