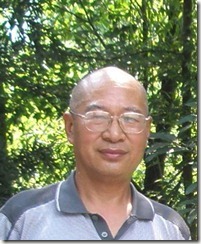 (Hangzhou, Zhejiang—Jan. 31, 2012) The subversion trial of longtime dissident and Christian Zhu Yufu for posting a poem online around the time of the Arab “Jasmine Spring” ended on Tuesday morning with no sentence announced.

The Hangzhou Intermediate People’s Court was scheduled to convene at 9 a.m. in the No. 10 courtroom to hear the case against Zhu for “inciting subversion of state power.” By about 12:30 p.m., Zhu’s family members said the hearing had ended and the court said it would announce the sentence “another day.”

The court described Tuesday’s proceedings as “an open trial.” However, none of the more than 20 people who attended the hearing were people known to Zhu’s family. Furthermore, Zhu’s family was given only two tickets to the proceedings, and none of Zhu’s friends – who were invited “to drink tea” [with police or other authorities] or were put under surveillance or warned not to go to the hearing – was able to make it to this “open trial.” Zhu’s wife and son were in the courtroom – the first time since Zhu was taken into custody on March 5, 2011, that the family has been able to see each other.

Zhu, a political dissident for more than three decades and a baptized Christian, was represented by the well-known Christian human rights lawyers Li Baiguang and Li Duiyong of the Beijing Gongxin Law Firm who gave a vigorous defense. 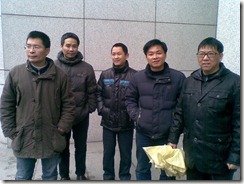 (Photo shows other Hangzhou dissidents who met on Monday with Zhu’s lawyers to express support. They are Lü Gengsong, Hu Chen, Wei Chenling, Chen Shuqing and Zou Wei, right to left. Click on photo to enlarge).

Zhu’s family said that the only thing Zhu had done was to use his writing to express some personal thoughts and positions, which is nothing more than an exercise of one’s civil rights and in no way constitutes a crime. In the courtroom, Zhu only admitted that he had used the name “zhuyufu89” online, but did not admit anything else. His family said that the prosecution’s case against Zhu was based on material taken out of context and on the presumption of guilt. They said that the poem posted online cannot be proved to be written by Zhu; it might have been re-posted from elsewhere. Furthermore, the poem posted online was irrelevant to the case and cannot be considered evidence of the crime of subversion.

Zhu reportedly appeared calm in court, and aside from looking tired due to his 11-month incarceration, he seemed to be in acceptable physical condition. He asked for permission to sit down during the proceedings. He reportedly described himself to the court as someone who always has a smile for others, is peaceful in his interactions, advocates non-violence, is opposed to violence and is not vengeful. When the prosecutor asked why he had some sharp words, Zhu replied that it was because of the many injustices he has experienced during his long incarceration for his political dissent. There was a reason for the words, but they were simply to express the injustice that he had experienced.

He also told the government prosecutor that “I am already 60. I can’t start anything.” Zhu does not regard the state as his enemy; his family members say that he does not want to be thrown back in prison at his age and that he’s not able instigate any trouble. He just wants to regain his freedom as quickly as possible.

Zhu was born in 1953, which makes him 60 according to the Chinese, who consider a baby to be a year old when he or she is born. Zhu had previously served two prison terms totaling nearly a decade for his dissent, which dates back to the 1979 Democracy Wall movement.

During his time in the Hangzhou detention center, Zhu has been allowed to read books and is reportedly studying English and reading English-language materials.

ChinaAid will continue to pay close attention to the developments in Zhu’s case and appeals to Christians and churches to pray for him. ChinaAid also urges the Hangzhou authorities to respect China’s law and, according to the law, release the innocent brother Zhu at an early date.