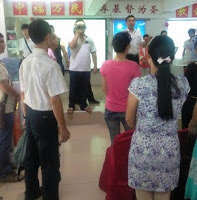 Li Baiguang, a lawyer renowned for his human rights work, took up the defense of his client, Yang Zhaocun, during the first morning and afternoon of the trials, expounding that religious freedom is right sanctioned by both China’s domestic laws and the Universal Declaration of Human Rights, of which China is a signatory.

During questioning, Li refuted the public prosecutor’s claim that pastors must have certificates in order to preach and attend state-run churches. This left the prosecutor reportedly dumbstruck, inciting laughter from the trial’s observers.

Yang was originally taken into police custody on March 5 in connection to a meeting of leaders from several house churches. The next day, he, along with four other Christians in attendance—Liu Yan, Zheng Lan, Chen Yajie, and Wang Lulu—were administratively detained for “gathering a crowd to disturb public order.” Li Jinglin, Zheng’s lawyer, said his client was shackled.

China Aid will continue to report on this case as information becomes available.

China Aid exposes abuses, such as those suffered by house church Christians in Xinjiang, in order to stand in solidarity with the persecuted and promote religious freedom in China.