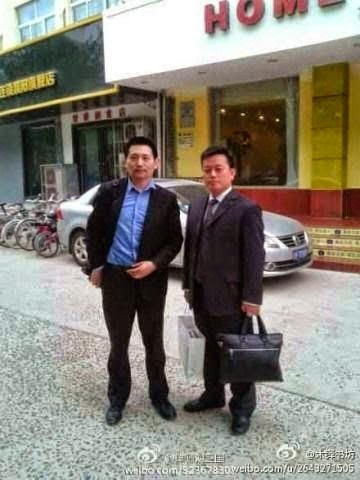 
(Nanle County, Henan—April 16, 2014) The long-awaited trial of a detained pastor in China’s central Henan province began on Thursday, only to have court proceedings indefinitely suspended due to extreme tension and the defendant’s last-resort dismissal of his lawyers.

While the hearing took place, Nanle County was under a complete lockdown, including a curfew for all residents and guards stationed at every intersection in the county. Only two of Pastor Zhang Shaojie’s family members were allowed to attend the trial, and a U.S. Embassy official was barred from the courtroom.

On Friday, Zhang’s family issued a statement regarding his decision to fire his lawyers during the court session. It read: “During the trial of Zhang Shaojie, the lawyers Liu Weiguo and Zhao Yonglin argued on the basis of reason and performed a magnificent job…The court flew into a rage…and detained them… They are under great pressure and in danger of losing their lawyers’ license!

“When we, the family, learned this, we proposed to fire them in order to let them keep their jobs. We don’t do this willingly, but we really have no other choice. This is our declaration in order to clarify all types of speculation in the outside world. Our thanks go to the two lawyers…”

During the trial, Zhang, who was detained on Nov. 16 for “gathering a crowd to disrupt public order” and fraud, told Liu and Zhao that they had done their duty, but can do no more as the court is unjust. Zhang also stated that it would seem apathetic towards Li Cairen, another detained Christian who authorities claim is the victim of Zhang’s fraud charge, as she is still being held in an unknown place, Liu said (https://chinaaid.org/2014/04/henan-tspm-pastor-tried-rights.html).

Zhang, Zhao and Liu felt that the court was being unreasonable in regards to Li Cairen and the other three witnesses. Both lawyers claimed that the written testimonies shouldn’t be accepted into the record without the witnesses present to confirm the authenticity of the records, as they suspected that the testimonies might have been fraudulent or obtained through torture. Zhao and Liu demanded that the “show trial” be stopped and that Li Cairen’s rescue be made a priority.

Town locked down
Beginning on the afternoon of April 9, officers were sent to guard all the major roads and intersection into Nanle County, where they checked the IDs over everyone entering the county. Many of those who were stopped on the road were forced to leave Nanle County.

The following morning, went the court session began, the entire city was on lockdown. According to one believer, there were guards stationed every few steps. Also, radio signals around the court were shielded and a large number of plainclothes police were patrolling the courthouse.

When Wang Yi, born Chen Jianping, and her fiancé, Hua Chunhui, both rights activists, attempted to go to the court, they were held by police officers and later taken from Nanle County by Domestic Security Protection Squad agents to Wang’s hometown of Changyuan, Henan.

Police also held about a dozen other citizens who attempted to gather at the courthouse.

Meanwhile, the court session opened in a disproportionately small courtroom, where only two of Zhang’s family members, his wife and youngest daughter Zhang Lingxin “Shanshan,” were allowed to be present. A government employee took every other seat.

Confined to the courtroom
At 5 p.m., having reached no conclusion, the judge adjourned the trial and announced that it would resume on a date to be determined. Police then locked the iron gate that leads to the hallway, trapping the lawyers in the courtroom.

Zhao and Liu were first told that the defendant was being escorted into a police car, and it was “inconvenient” for them to leave court. Then, a large number of police officers came to the courtroom to conduct a security check on the lawyers, which they rejected. Finally, the chief judge, Guo, said that the lawyers could leave after signing their written records. The lawyers said they would sign, but that the court must not take such unnecessary measures against them.

During the more than two-hour time period that the lawyers were held in the courtroom, they live-tweeted the events via their Weibo accounts, a Twitter-like social media platform. Netizens from across China who saw the lawyers’ messages called the court and governing bodies in their own towns, denouncing the illegal behavior of the court.

It was only after the Shandong Provincial Department of Justice and the Tai’an Municipal Bureau of Justice in Shandong intervened that the judge allowed the lawyers to sign the paperwork and leave. With help from the two Shandong government agencies, President Sun, of the Puyang Municipal Lawyers Association, was able to come to the courthouse and pick up Zhao and Liu.

Questionable proceedings
Tensions in the courtroom ran high and no progress was made as the lawyers objected to all evidence submitted by the prosecution that had come from witnesses—none of whom were present at the trial. Zhao, Liu and questioned the judge repeatedly, but were denied each time.

A written testimony from Li Cairen, the key witness and supposed victim of Zhang’s fraud charge, was submitted during the trial, but the lawyers questioned the validity of the record without having Li there to corroborate the facts in the record (see https://chinaaid.org/2013/12/update-nanle-county-christian-church_23.html and https://chinaaid.org/2014/01/exclusive-identity-of-12-detained-nanle.html).

“While offering the evidence, the prosecutor called it the ‘witnesses’ testimonies.’ We pointed out his error that, actually, they are not witnesses’ testimonies. Rather, they are a replacement and are written records. They are something produced by the police that is seemingly right but actually wrong as there are a lot of problems with them,” Liu said.

“None of the four witnesses appeared in court. We questions the prosecutor and asked him for the reasons the witnesses failed to appear in court,” Liu added.

“Indeed, there are names of two police officers. However, from the handwriting, it is obvious that one police officer signed the two names, which is a violation of the requirement in the Criminal Procedural Law,” Zhao said. “We raised our objections, and the prosecutor couldn’t give an explanation.”

The lawyers felt that, including the written testimonies, there was no evidence to suggest that Zhang was guilty of fraud. “We pointed out in the court again and again that the so-called fraud case involves the victim Li Cairen, who is now being illegally detained. She was illegally kidnapped… in December 2013, and her whereabouts are unknown even now,” Liu said.

Lawyer Xia Jun, who was one of the first lawyers to provide legal aid to the detained Nanle County Christian Church members, said he witnessed Li’s abduction. “I saw with my own eyes Li Cairen being dragged away by [police] from Zhang Shaojie’s home. In order to get evidence [against Zhang], the Nanle police dragged Li away on Dec. 21. Now they won’t let Li come out to testify thus her testimony is invalid.”

“When we found out that [the procuratorate] was suspected of violating the law and committing a crime—when a victim is still under illegal control, all people should have an obligation to solve this problem first,” Liu said. “Therefore, we demanded that the court terminate the trial and rescue Li Cairen. However, the court still pushed forward by force.” In addition, China Aid learned that Li’s husband, Liu Yankun, was placed under house arrest on the day of the trial; his whereabouts are currently unknown.

On top of concern for Li, the lawyers felt that other aspects of the trial were unfair. “Originally, it was a case of joint offense, and they should be tried at the same time. However, it was split by force into many cases [after the cases were returned to the Nanle County Public Security Bureau for further investigation]. The result of this is there was no way we could conduct investigations on the other defendants [behalf],” Zhao said.

The lawyers simply want authorities to follow the law: “Respect the law, respect a citizen’s most basic dignity and freedom, and release Li Cairen so that Zhang Shaojie’s case will receive a just and fair trial. We believe Zhang Shaojie is innocent,” Liu said.