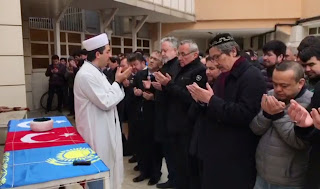 (Istanbul—Feb. 27, 2018) Hundreds of Ughyur and Kazakh Muslims in Turkey held an Islamic funeral with no body for an imam who was killed in captivity in China’s western Xinjiang Autonomous Region.

Imam Akmatti, a Kazakh Muslim living in China, was detained by public security on June 2, 2017 in Changji Prefecture, Xinjiang and held in the Mulei Kazakh Autonomous County Detention center, where he was declared dead, believed to be killed by authorities, two days later, on June 4.

Upon returning the body to his relatives, public security officers told the family that he had committed suicide. The officers at that time also claimed that the body needed to be buried in the next two hours and refused to allow them to hold a Muslim funeral for him. For many Islamic adherents, suicide is considered a “direct sin against Allah” and it is believed that those who commit suicide do not have a chance to enter paradise.

According to villagers in Akmatti’s hometown, the public security bureau stationed guards at his burial site to keep people away. His family and friends were not allowed to attend a memorial service for him, either. Starting in July, more than 100 people connected to Akmatti were detained all over Xinjiang.

Because of the lack of respect and proper burial for the imam, a large group of Turkish Muslims held a proper Islamic funeral in Istanbul on Feb. 23, albeit without Akmatti’s body, which is still buried in China. Members of the Kazakh, Uyghur, and Uzbek ethnicities, three of China’s 56 official ethnic groups, were in attendance at the funeral as well as members of the Turkish and Tatar groups.

A Kazakh in attendance explained some of the significance of the event. “It is a great insult to Muslims that Akmatti was not buried according to Muslim customs. According to Muslim belief, whether the deceased was an enemy or a friend, all other Muslims must take it as their duty to bury them. This is the first time a ceremony without a body has been held for a Kazakh imam outside of China.”

Local news outlets and television stations covered the event in Istanbul as well.

In recent months, persecution against Muslims and predominantly-Muslim ethnicities in Xinjiang has increased dramatically. Across the region, Communist officials have opened “political training centers” to indoctrinate Muslim citizens and force them to learn propaganda about the Communist party. People detained in these “re-education” efforts are taken for months at a time and forbidden contact with the outside world.

Muslims in Xinjiang have also been ordered to break halal to celebrate Chinese New Year and to destroy the symbol of the star and crescent from Muslim graves.

In another case, a 41-year-old Kazakh man named Salheti Halibieke in Altai, Xinjiang, disappeared in November 2017 under an undisclosed criminal charge. He served as an ahung, which is a regional term for an imam, for the local mosque there, which has since closed in his absence. His family has been unable to learn anything of his condition since he was taken.

ChinaAid reports on instances of religious persecution against Chinese citizens of faith, such as the death of Imam Akmatti and the arrest of Salheti Halibieke, in order to expose abuses by the Chinese Communist Party and promote religious freedom, human rights, and rule of law.