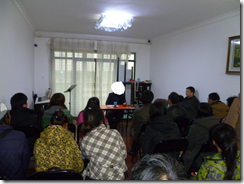 (In south China—March 17, 2012) More than 20 religious leaders, including house church leaders, attended a one-day legal defense and justice seminar funded by ChinaAid where they learned that seeking legal defense in the face of religious persecution is just as biblically based as turning the other cheek.

The attendees of the January 4 seminar in a city in south China came from the provinces of Sichuan, Hunan, Guizhou, Yunnan and Henan, and the cities of Beijing and Tianjin. Among them were some from minority and tribal groups, including church leaders from the Wa and Miao people.

Many of the attendees had personal experience of religious persecution, including several who had been imprisoned for their faith. Through the training, they learned that while persecution is inevitable when one walks the narrow path and adheres to the faith, it also is due to the social and judicial injustice that is part of daily life in China.
Traditionally, Chinese Christians thought they were supposed to simply bear persecution in silence: when someone strikes you on your right cheek, you should turn to him the other also. But at the seminar, they learned that the Bible also teaches that when faced with injustice and persecution, it is right to seek justice and a fair remedy from higher authorities through legal and peaceful means. To do justice, love mercy and walk humbly with God in China will benefit both the persecuted faithful and the Chinese people as a whole.

Attorney Li, whose further identity is being withheld for his protection, taught the group many articles of law and used many cases studies, which made it easy for the attendees to follow and remember the legal training. He also gave practical instructions that the attendees found very helpful on ways to assist persecuted people of faith, including Christians, in China.

He told the attendees that they must understand one basic point: China is ruled by a one-party dictatorship and, although the law on the books says the right to freedom of worship is protected, it is of limited use in defending persecuted people of faith.
Attorney Li added that fighting evil and defending oneself requires courage. By the end of the seminar, all the attendees expressed their readiness to fight to the end for the God-given and inalienable right to worship God and to preach the Good News to Chinese people free from fear.

The attendees also expressed their heart-felt thanks to Attorney Li and to ChinaAid and the several independent house churches who were the co-sponsors of the seminar. ChinaAid regularly supports these legal seminars, which are organized at the request of independent religious groups and other non-government groups,  including house churches.