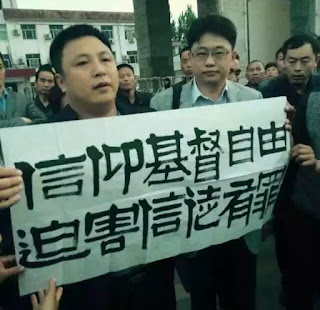 Nearly 200 Christians showed up outside the courthouse in Cao County, Shandong, when the high-profile case went to trial on May 27, according to Qiao Nong, China Aid’s special correspondent in Hong Kong.

The court ruled that Zhao Weiliang was an organizer in the Total Scope Church and sentenced him to four years’ imprisonment, while Cheng Hongpeng was given a three-year sentence as an active participant. The judge asked both defendants if they wanted to appeal, and both said yes.

“These two pastors, who have been arbitrarily imprisoned since June 2014, are totally innocent,” said China Aid founder and president Bob Fu said. “They have been persecuted purely for the manifestation of their faith. This harsh sentence clearly shows China is moving backward on religious freedom and rule of law. President Xi and his regime should be held accountable by the international community for this brutal violation of international human rights and China’s own constitution.”

Liu Cuiping, Zhao’s wife, was one of nearly 200 Christians who gathered outside the courthouse. She said the area was full of “plainclothes police, special police, [and] six or seven vehicles were parked there,” adding that “there were many people videotaping,” who she believed were plain clothes police.

Speaking to reporters the day after the sentencing, she was emphatic that her husband was a Christian and not a member of the Total Scope Church, better known as the Born Again Movement, which the Chinese government has labeled as a cult.

The 22 Christians were rounded up by 30 Heze municipal police for practicing hymns and playing musical instruments in a factory owned by a church member. Four children, their parents and a pregnant woman were immediately released but the others were placed under administrative or criminal detention. On July 23, 10 were released on bail. A week later, the Cao County procuratorate approved the arrest of Zhao and Cheng.


On May 22, the Cao County court said in a written decision that Wan Aimei, another defendant in the case, was guilty of a minor crime but was exempt from criminal punishment. Wan, in her 50s, had been in detention since last June. In addition to being illegally detained, her home was also illegally searched.

Liu said that the court described her husband as being a repeat offender because of his previous record of administrative penalties for exercising his Christian faith.

“He was sentenced because he believed in Jesus Christ,” she said simply. In 2006, he was given an administrative penalty and in 2010 was extra-judicially sentenced by police to a 1 1/2-year re-education-through-labor term.

“First, the Cao County Court completely distorted the facts and ignored the facts, because the facts [of this case] were very clear. Second, from a legal standpoint, this decision was a perversion of the law,” Chen said, adding that “politically, this is [a case] of religious persecution and an attack on religious belief.”

Chen predicted a worsening of the political climate. “In China, this kind of situation is likely to become tighter and tighter in the future. This kind of anti-civilization, anti-progress trend is going to become worse and worse.