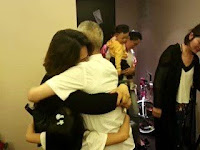 (Beijing—May 10, 2017) A prominent human rights lawyer returned to a joyous reunion with family and friends today after suffering almost two years of immense torture at the hands of authorities in China’s northeastern Tianjin municipality.

Li Heping, a Christian human rights lawyer originally arrested on July 10, 2015, during the now infamous “709 crackdown” on attorneys who defended people targeted by the government, arrived at his home in Beijing at 2 p.m. on May 9 and was met by family and friends. During his time in prison, he experienced torture at the hands of his captors. According to his wife, Wang Qiaoling, he is weak and thin, and his black hair has turned completely gray, but he is in fine spirits.

When Wang saw her husband, she and their young daughter embraced him. Additionally, he was reunited with his brother, Christian human rights lawyer Li Chunfu, who was released on bail on Jan. 12 with symptoms of schizophrenia after more than a year of facing severe torment in police custody.

Authorities released Li Heping after convicting him of “subversion of state power” in a secretive trial on April 28. During the hearing, officials sentenced him to three years in prison with a four-year suspension and deprivation of political rights. According to Chinese law, Li should have been immediately let go; instead, government personnel kept him in custody and coerced him to call his wife and request that she come to Tianjin to collect him. Warned by the examples of other families of human rights lawyers, who disappeared into police custody after responding to similar summons, Wang voiced her fear to her husband and requested that he come to Beijing if he was truly freed. Li responded that he understood her hesitancy, and the call was disconnected soon afterwards.

ChinaAid exposes abuses, such as those suffered by Li Heping and his family, in order to stand in solidarity with persecuted Christians and promote religious freedom, human rights, and rule of law.