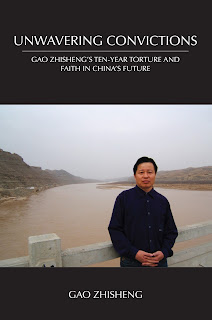 (Yulin, Shaanxi—Aug. 14, 2019) It has been two years since the brother of the prominent Chinese human rights lawyer and Noble Prize nominee Gao Zhisheng arrived at the attorney’s apartment in Shaanxi province for a visit on Aug. 13, 2017, only to discover him gone.

For 23 days, his supporters assumed him kidnapped by authorities, much like he had been several times before. In reality, however, the officials were searching relentlessly, finally crossing the border into the neighboring Shanxi province and finding him with two sympathizers, Shao Zhongguo and Li Fawang, who had smuggled him out of his home in order to free him from the watchful eyes of the authorities. He had lived under the surveillance for three years, following his 2014 release from prison.

Upon discovery, Gao immediately vanished into police custody, and Shao and Li were criminally detained.

Since then, the outside world has heard little information about Gao. Sometime after his disappearance, Beijing officials claimed they had him in secret custody within the Chinese capital, but no one has been able to verify their claim. Likewise, Gao’s family does not know where he is being held, and he has not been allowed to consult with lawyers.

Chinese law dictates that it is illegal for prisoners to be held for more than six months without a charge, and Gao has now been held for four times that amount, constituting a severe violation of rule of law.

Gao’s previous arrests and disappearances all stem from his human rights work, and he describes the horror he faced in his piece “Dark Night, Dark Hood, and Kidnapping by Dark Mafia.”

During the three years Gao lived in his apartment, he secretly penned Unwavering Convictions, a book which describes atrocities committed by the Chinese Communist Party. ChinaAid smuggled the book out of China and published it with the Carolina Academic Press and the American Bar Association. The book, which has been translated into English, can be purchased here.

Because of the mounting pressure against their family, Gao’s wife and children fled to the United States in 2009.

ChinaAid exposes abuses in order to stand in solidarity with the persecuted and promote religious freedom, human rights, and rule of law. If you wish to partner with us in helping those persecuted by the Chinese government, please click the button below to make a charitable donation