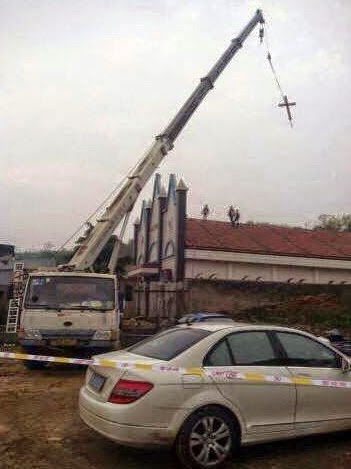 
(Zhejiang—April 28, 2014) Two churches in China’s coastal Zhejiang province were targeted in the province-wide campaign, “Three Rectifications and One Demolition,” on Thursday, and one person associated with Sanjiang Church was detained.

The outer walls of the church and the cross topping the building at Baiquan Church in Zhoushan were forcibly demolished early Thursday morning when more than a hundred SWAT and paramilitary officers surrounded the church.

“At 6 a.m., a group of people came over and took down the cross by force. They also tore down our walls. He also took out a new plan and remade the walls for us. Then they put the cross on the wall,” Ms. Yu, a church member said.

“[Before the destruction], we discussed the matter with the officers. Since they wanted to put the cross on the wall, the existing wall should not be demolished. [We said] we’ll make a cross and put it on the wall. He said their plan had been submitted to the superiors and couldn’t be changed. Then he began to tear down the walls of the main gate of the church by force. They were demolishing the façade of the church, saying there were safety issues with it and that all was being done according to the plan they designed.”

Authorities also blocked access to the church. “There are three entrances to the church. They are guarding every one of them,” another believer said. “I only saw one entrance. I don’t know how many people there are at the other two entrances. I’m sure there are about a hundred of them at each entrance. They’ve parked their vehicles on the road leading to Baiquan Church.”

One Christian was detained during the conflict. “Liu Shanhong, a missionary of our church, was taken away and placed under house arrest at 6 a.m. [Thursday],” Ms. Yu said. Details regarding Liu’s detention are unavailable at the moment.

Ms. Yu told China Aid that believers from nearby churches had come to Baiquan before the demolition to pray for the church.

China Aid first reported about the persecution against Baiquan Church in March. Since that time, believers have been attempting, unsuccessfully, to negotiate with officials at the religious affairs bureau, the local China Christian council and Three-Self Patriotic Movement (https://chinaaid.org/2014/03/three-self-churches-in-zhejiang-anhui.html).

Less than a day before the events at Baiquan Church, a Catholic church in Pingyang County, Wenzhou was facing persecution. On Wednesday, several Christians who help lead the church were detained or summoned by authorities.

Chen Haiyan was taken by Wenzhou Domestic Security Protection Squad agents in a nearby town. Another Christian, Zhao Qianjun, from Baixiang Church in Yueqing County, was summoned to the public security bureau. Fu Gangqiao, a missionary from Xiaojiang Church, also in Pingyang County, was taken by more than 10 domestic security protection squad agents between 11-12 p.m. After several hours of talks, Fu was released and told to return the next morning.

“Since the Christians are guarding the big [Sanjiang] Church, on which they’ve spent 30 million yuan (US$4.8 million), the authorities lay their hands on smaller churches first. They have already done the study. This time, they’ve dispatched quite a few chengguan, the city administrative clerks, and did it according to plan,” a local pastor said (https://chinaaid.org/2014/04/exclusive-china-aid-receives-internal.html).

Local Christians told China Aid that Rong Hua, a missionary from Sanjiang Church in Yongjia County, Wenzhou, was detained on Tuesday and has since been placed under criminal detention. They said he is being held at Zhejiang Prison No. 4 in Shangtang town, Yongjia County.