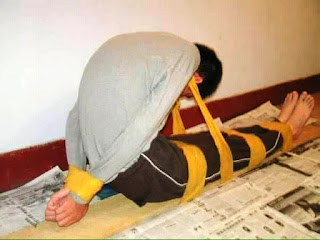 Uighur woman pled for death as authorities tortured her

(Washington, D.C.—Nov. 29, 2018) “I thought that I would die rather than go through this torture and begged them to kill me,” said 29-year-old Mihrigul Tursun, an Uighur woman, told the press at Washington, D.C.’s National Press Club on Monday, speaking of her time in China’s notorious “re-education camps.”

“The authorities put a helmet-like thing on my head, and each time I was electrocuted, my whole body would shake violently and I would feel the pain in my veins,” Tursun’s official statement reads, describing the time she was taken into a separate room and shackled to a chair. She continued, “I don’t remember the rest. White foam came out of my mouth, and I began to lose consciousness. The last word I heard them saying is that you being an Uighur is a crime.”

The camps, part of China’s ongoing suppression of innocent Muslims under the guise of curbing extremism, spread rapidly throughout Xinjiang in the past few years, most holding thousands of prisoners at a time. Former inmates often report torture, and Tursun said she suffered an invasive medical procedure, was forced to take unknown pills that caused loss of consciousness, made to drink a suspicious liquid that affected menstruation, had her head forcibly shaved, and was sleep deprived for four days while being interrogated continuously.

Altogether, Tursun was arrested three separate times. After just three months of being imprisoned, nine women incarcerated along with her died.

China first denied the existence of these camps, then alleged that they are intended to instruct inmates, despite estimates that as many as 2 million ethnic minorities in Xinjiang, most of whom are Muslims, have been subjected to such mistreatment.

In response to these abuses, U.S. policymakers introduced a bill to the Senate on Nov. 14, calling for sanctions on Chinese officials involved in the mistreatment and for the Trump Administration to urge China to immediately cease the persecution.

ChinaAid exposes abuses, such as those suffered by ethnic minorities in Xinjiang, in order to stand in solidarity with the persecuted and promote human rights, religious freedom, and rule of law.