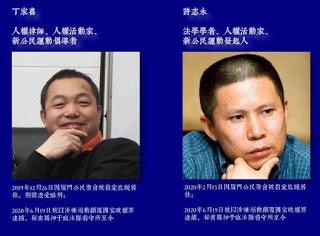 Human Rights Lawyers Ding Jiaxi and Xu Zhiyong.
(Photo: ChinaAid)
(Linyi City, Shandong, Province—Feb. 03, 2021) On January 22, information from an unidentified lawyer who met with detained Human Rights Lawyers Ding Jiaxi and Xu Zhiyong reveals Chinese Communist Party (CCP) officials have tortured them. During interrogations, CCP authorities deprived both men of sleep for extended periods and only gave them small amounts of water and food.
One CCP measure called “residential surveillance at a designated location,” permits authorities to keep a person detained at a secret location outside of prison facilities before being formally arrested. The undisclosed location, however, often serves as a breeding ground for coercion and torture.

On January 21, for the first time since detaining Lawyers Ding and Xu approximately one year, CCP authorities allowed the men to meet with their lawyers online. Later, in an interview, the unknown lawyer reported that Lawyer Ding appeared resolute and that he spoke in a deliberate tone about torture he endured during his designated residential surveillance. He revealed that at one point, “five people took turns interrogating him for seven days and nights. Officers also deprived him of sleep for prolonged periods of time. For two weeks during his most intensive interrogation period, they gave Lawyer Ding only half a bun for each meal and limited him to only 600ml (approximately 20 ounces) water per day.”

Regarding Lawyer Xu’s torture, according to the unidentified lawyer, sometimes when CCP officials deprived him of sleep, they only allowed him to rest 2 – 4 hours per day.

CCP authorities have imprisoned Lawyers Ding and Xu at the Linmu Detention Center in Linyi City, Shandong Province since December 13, 2019. Once convicted, both men may face harsh sentences.

Lawyer Ding’s wife, Luo Shengchun, currently living in New York with their daughter, admitted that Lawyer Ding shed tears after hearing updates about their child. Ms. Luo said that the community church she attends has called on CCP authorities to release her husband.

After hearing about those who support him, Lawyer Ding said, “For my convictions, I am willing to keep going, and am prepared for anything. I thank all those in the community, church friends, and all friends…, and—I love you all.”