(Langzhong, Sichuan — August 17, 2012) The house church in Zhanggonggiao Village, Qili-Banshichu, Langzhong City, Sichuan Province, that filed an administrative review according to the law because of persecution and unjust punishment, received a reply from Sichuan Langzhong Municipal Government on Monday, August 13, which ruled that this church “was involved in illegal religious activities” and “the punishment given to it is appropriate.” 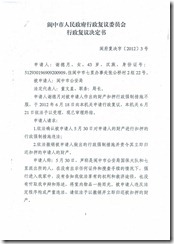 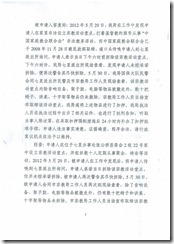 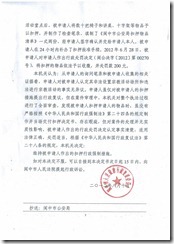 This church was raided and “outlawed” on May 30, 2012. Church property was confiscated and sister Xie Deyue who hosted worship meetings at her home was summoned for questioning. The leader of the church is Pastor Li Ming. In June, believers of the church hired a rights defense lawyer according to the law to file an administrative review and administrative lawsuit. On June 14, the rights defense lawyer from Beijing arrived at Langzhong and drafted an “application for administrative review” and an “administrative indictment” on behalf of Xie Deyue. On June 18, the “application for administrative review” was delivered to Langzhong Municipal People’s Government. The government agent provided a receipt and said that within five days they would determine if the application would be accepted. On June 21, the Legal System Office of Langzhong Municipal People’s Government decided to accept the case and issued a notice of acceptance of the case. On June 28, the Langzhong Municipal Public Security Bureau issued an “administrative punishment decision”(2012), No. 00270, giving Xie Deyue the administrative punishment of a 200-yuan fine and the confiscation of books and chairs. (See other related reports by ChinaAid：https://chinaaid.org/2012/08/sichuan-langzhong-church-leader.html )

In the “Administrative Review Decision by Langzhong Municipal People’s Government Administrative Review Commission” issued on August 10, 2012, the defendants, i.e., the Domestic Security Protection Department of Langzhong Municipal Public Security Bureau and Qili police station, gave this reply, “On May 29, 2012, this public security bureau found that the petitioners had illegally set up a venue for religious activities at home and in the disguise of Christianity, carried out illegal religious activities of China House Church Alliance which, however, is an organization that had been outlawed by the Ministry of Civil Affairs on November 28, 2008…”

So, apparently, the suppression activities and persecution carried out against the house church of Zhanggongqiao Village, Langzhong City occurred mainly because of the church’s connection with China House Church Alliance.  And it is clear from the reply given by the Domestic Security Protection Department of Langzhong Municipal Public Security Bureau and Qili police station, that Christian religious gatherings and activities other than those of the government-controlled front organization “Three-Self” Patriotic Movement, are deemed illegal and dangerous.

Sister Xie Deyue told Radio Free Asia that on May 30, at 9am, about 20 people who claimed to be agents of the Domestic Security Protection Department of Langzhong Municipal Public Security Bureau and Qili Town police station showed up with police vehicles, minivans, and rented tricycles. Without showing any identification papers, nor a search warrant, they forced their way into her home and took everything; they even ripped the Spring Festival scrolls and cross-stitch embroidery from the walls. They then took seven-month pregnant Xie to the police station.
（http://www.rfa.org/mandarin/yataibaodao/hc-08112012001718.html）

China Aid Association is disappointed and concerned by Langzhong Municipal Government’s decision on the administrative review and urges relevant agencies and officials to attach importance to the development of this case, redress it in time according to law, and safeguard citizens’ lawful freedom of religious belief. In the meantime, ChinaAid calls on churches in China, especially house churches, to intercede to God for this persecuted church and its believers.

Beijing Shouwang Church said it well in its Announcement of Outdoor Worship Service on August 12, 2012, “In the midst of a crooked and twisted generation, Daniel once ‘prayed and gave thanks before his God, as he had done previously.’ No matter how difficult our challenges are, may we be like Daniel in praying and giving thanks before our God, as we have done previously. No matter what the circumstances may be, we believe that God will be with his faithful children to reveal his faithfulness and grace, so we are not afraid of the price we may have to pay.”