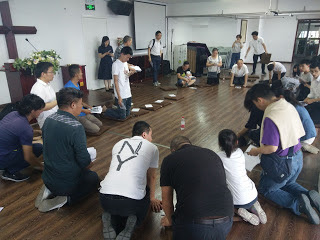 Authorities suspected that Ms. Liu had written an article circulating online about police previously being stationed at her dad’s home. Although Ms. Liu informed police officers that she had not posted the articles, they continued questioning her. Ms. Zhang a close friend of Ms. Liu, said “She (Ms. Liu) did not write or post any articles recently. Ms. Wang, also a member of ERCC, said that Chengdu police officers had monitored the home of Ms. Liu’s dad since November 7, “Initially, they stayed there 24 hours every day to prevent him from being baptized.”

Ms. Liu told friends that on the day of the 2nd anniversary of the 129 crackdown on Early Rain Covenant Church, local police officers asked her to “drink tea with them.” She refused. Again, on December 15, police invited Ms. Liu to “drink tea together.” She declined again. Later, at dusk, the three officials visited her at home. questioning whether she wrote the article.

Two years earlier, in December 2018, Chengdu authorities dispatched more than 100 police officers and officials of the Religion Bureau to ERCC. At this time, they summoned and detained more than 100 members of the church, including Wang Yi, the lead pastor, and Elder Qin Defu.

As pictured at the start of this story, despite ongoing harassment by Chengdu police, Chengdu ERCC members remember and continue to pray for imprisoned Pastor Wang Yi and Elder Qin Defu.

###
Remember the prisoners as if chained with them
—those who are mistreated—
since you yourselves are in the body also.
~Hebrews 13:3