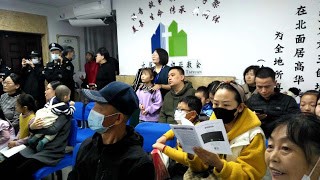 (Taiyuan, Shanxi Province—Nov. 17, 2020) On November 15, 2020 at approximately 9 am, armed military police raided Xuncheng Church, a house church in Taiyuan, and demanded that the worship service “Stop!” After negotiation, local police who replaced armed officers, seized Minister An Yankui with six other Christians (including Minister An’s wife) and transported them to the police station where they interrogated and held them until 10 pm.

Officers alleged that they interrupted the worship service because congregants did not wear masks. Minister An Yankui asked to speak with police after the Sunday worship, but police refused. During the conversation, an officer restrained Minister An with a strangle hold while others assaulted him.

During the more than 10 hours of detention, congregants waited at the church, hoping for an update regarding Minister An and the others. They did not hear any news, however, until police released the seven Christians at 10 pm.

Early Rain Covenant Church (ERCC) planted the Taiyuan Xuncheng Church in 2008. Minister An, an alumnus of Western China Bible School, has written numerous articles in memory of Pastor Wang Yi, a minister who deeply impacted him. In 2018, Minister An published an article, “Christians and Catholics’ adversity during the Boxer Rebellion.”* He wrote “As a modern preacher of a Shanxi church, …in today’s severe circumstance, it is replete with Boxers’ spirit. May the Lord grant us strength to not shy away from the cross so as not to testify to the gospel of the cross. The 1900 Boxer Rebellion traumatized churches at that time, but the mishap paved the way to the revitalization of churches in China.”

In response to another incident of religious persecution, Chengdu ERCC sent out an urgent prayer request, asking Christians to intercede for Brother Wu Wuqing, a congregant, who serves as the leader of a small group at this church. Friday evening, September 13, he preached at “The Good News in Grace” evangelical event. The next day, police summoned Brother Wu to the Chengdu Longquanyi police station. This indicates his siege may be related to his preaching event. Later that day, at approximately 10 pm, officers confiscated his and his wife’s cell phones and their computer.

Prior to converting to Christianity, Brother Wu worked as an upper-level leader at an enterprise in Guangdong, Now, he attends Western China Bible School and works full time at church. During this detention, authorities detained Brother Wu for almost 20 hours.

*The Boxer Rebellion officially supported the 1900 (year) peasant uprising that attempted to drive all foreigners from China. “Boxers,” the name foreigners gave to a Chinese secret society, the Yihequan (“Righteous and Harmonious Fists”). Originally, they aimed to destroy the dynasty as well as Westerners who held a privileged position in China.

**ChinaAid: Although, as these examples of Religious freedom abuse reveal, Chinese Communist Party (CCP) authorities may stop worship services as well as siege Christians who preach. Intercessory prayers, however, for those being persecuted can never stop.
Yubing, ChinaAid Special Reporter