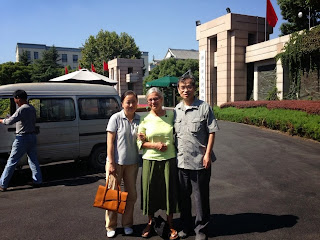 (Hangzhou, Zhejiang—October 15, 2013) A retired American physician was denied entry to the Zhejiang provincial Justice Bureau on Monday, were she attempted to appeal the Zhejiang No. 4 Prison’s decision to deny her access to provide necessary medical treatment to Christian dissident Zhu Yufu.

Devra Marcus, an internist from Virginia, was accompanied by human rights advocate and Chinese-speaker Kody Kness and a Chinese lawyer, Zhang Zanning, a health law expert and a physician. Also accompanying the group was Zhu’s wife and daughter, who waited outside the Justice Bureau compound.

Marcus and Kness went to the Zhejiang No. 4 Prison hoping to gain permission to Zhu, who is serving a seven-year sentence for subversion and who has been denied medical treatment for health problems including acute high blood pressure and coronary artery disease. Zhu has not received medical treatment for about a year, and both he and his family fear that he will die in prison.

Prison officials on Saturday refused to allow the pair even to submit a formal application for permission to visit Zhu, 60, who is serving his third prison term for his political activities. ChinaAid reported on this first attempt at: https://chinaaid.org/2013/10/us-doctor-denied-humanitarian-visit.html

On Monday, Marcus, Kness and Zhang went to the provincial Bureau of Justice, which oversees the province’s prison system, to appeal the prison’s denial, or to at least obtain assurance the Zhu would be properly examined and treated by a qualified cardiologist. Zhang was prepared to formally petition for Zhu’s early release from jail due to Zhu’s precarious physical and mental health and because has served more than one-third of his sentence.

Marcus and Kness were denied entrance to the Justice Bureau building. Zhang presented his lawyer’s license and a letter of introduction from his law firm, but after nearly two hours of what appeared to be deliberately obstructionist requests from officials, he also was denied entry into the Justice Bureau’s offices.

Marcus and Kness were deeply disappointed at being denied even the opportunity to apply for a humanitarian visit to Zhu. Such a visit is permissible according to China’s own prison regulations. Zhang said he would appeal the Justice Bureau’s refusal and all other matters concerning Zhu’s incarceration and treatment.

Zhu’s wife Jiang Hangli, told ChinaAid founder and president Bob Fu by phone that she and her family were deeply grateful to the international community for its prayers and tireless efforts to win her husband’s freedom.

“We will not relent until Mr. Zhu is free and treated humanely,” Fu said.