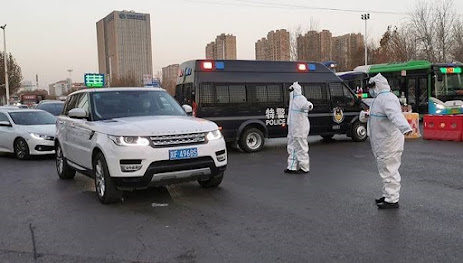 January 6, at Shijiazhuang entrance; medical personnel testing drivers and passengers.
(Photo: ChinaAid)
(Shijiazhuang, Hebei Province —Jan. 20, 2021) On January 6, newly confirmed coronavirus cases led to Chinese Communist Party (CCP) authorities launching closure measures in the city. Rumors on the Chinese social media platform Weibo linked this recent outbreak to religious activities local Catholic churches held.
On January 12, citizen investigators identified the person behind the spread of rumors of the area’s Catholic Churches being linked to the new flare-ups as a reporter for the official state media, Kai Lei from Wen Wei Po. On January 6, Mr. Kai had begun to directly accuse missionaries visiting churches. Next, the “five cents” scenario began to set off a round of “anti-foreign religion movement” on Weibo and WeChat.*

Also, on January 6, Mr. Kai posted on Weibo, one of China’s largest social media platforms, that missionaries visiting a church near the airport in Beiqiaozhai Village, one of 15 Catholic churches in Gaocheng District, Shijiazhuang City, may have caused the outbreak.

On January 7, the official Catholic Church of Shijiazhuang released a statement denying that the outbreak related in any way to the church’s religious activities.

More than one million Catholics live in the province of Hebei, with Gaocheng District, Hebei, having the highest concentration. After the CCP seized power in 1949, some Catholic churches registered with government agencies and joined the “Chinese Patriotic Catholic Association” independent of the Vatican.** In contrast, the other Catholics refused to join the government-controlled association and chose to be in communion with the Vatican. Those not in the state association are referred to as the “loyal church,” customarily known as the “underground church.” Although the officially registered Catholic church and the “underground church” coexist, they often take opposing sides in some situations.

The Vatican works to promote the unity of the official church and the underground (loyal) church, however, it has not fully eased tensions between the two.

Despite current, ongoing falsified posts on the internet connecting the COVID-19 episode in Hebei with the activities of the Catholic Church, on the afternoon of January 9, Hebei provincial officials held a press conference on epidemic prevention and control measures. During this time, they introduced the latest situation of Hebei’s COVID-19 prevention efforts and denounced internet rumors regarding the presence of “European and American priests doing missionary work in Gaocheng.”

Officials from Xingtai, another city in Hebei, have also published an announcement demanding religious organizations halt all activities and the opening of venues for such activities.

On Friday, January 8, Beijing, Hebei Province’s neighboring city, closed all of its 155 venues for religious activities. According to a Beijing official, however, none of Beijing’s 840 religious’ personnel had been infected or suspected of COVID-19,

Despite false information regarding their churches and constraints on religious gatherings, the majority of believers have not only expressed their understanding, they are cooperative and supportive of the epidemic prevention and control work.

* “Five cents” depicts a derogatory term for CCP paid online commentators/professional internet trolls. Payment may be up to RMB 0.50 for each comment that favors the Communist Party.

** Vatican City State depicts a sovereign city-state belonging to the Holy See (Sancta Sedes); a city state in Rome, the center of the Roman Catholic Church which the Pope rules.

*** The Holy See’s administrative unit, called the Roman Curia, which assists the Pope in governing the Catholic Church.

As COVID-19 worsens in Hebei, China, rumors blame Catholic church
###
When the righteous are in authority,
the people rejoice;
But when a wicked man rules,
the people groan.
~ Proverbs 29:2 (NKJV)
China Aid exposes abuses in order to stand in solidarity with the persecuted and promote religious freedom, human rights, and rule of law. If you wish to partner with us in helping those persecuted by the Chinese government, please click the button below to make a charitable donation.