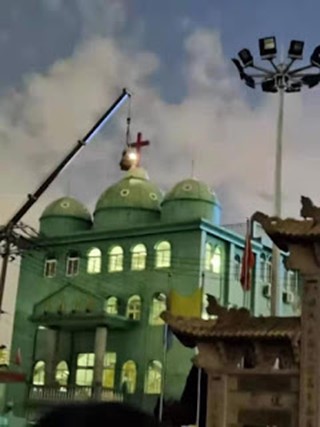 Several security guards held one church co-worker in a headlock and confiscated his cell phone. They warned him, “Do not fight back. We are enforcing orders from higher officials.”

One security guard threatened to beat a church co-worker, but another officer stopped him.

The CCP has forcibly removed Shuixin church’s cross several times in the past. During the first cross removal at 2 pm on June 30, 2014, the Zhejiang government had launched a campaign called “Renovation of old residential areas, old industrial plants and urban-villages, and demolishing of illegal buildings.”

Government contractors forcibly removed the cross from Shuixin church in the name of “demolishing of illegal buildings.”

Mr. Lin, another local Christian said: “In 2014, the government paid a number of security guards to remove crosses from churches. While the men forcibly removed our church’s cross, they held brothers and sisters in custody. Four years later, we re-erected our cross, but now CCP officials have removed it again.

According to the church’s believers, Shuixin church, built in 1928 had been rebuilt at the same location in 1986 and then again, later in 2005. Both rebuilds followed all legal procedures. The Zhejiang provincial religious affairs bureau approved the projects. The church received the legal land and property ownership certificates.

Mr. Wang, one more local Believer, did not try to hide his anger when he said: “Government officials claim a cross on a church roof top makes the city look bad and blocks a driver’s sight. They refused to approve for Shuixin Church to put the cross on its roof top.”

Another believer of Shuixin Church posted on social media: The government forcibly removed the cross on our church’s rooftop. He questioned:

On January 26, the Zhejiang provincial Christian committee and the Three-self movement committee issued a notice to temporarily ban all religious activities in the entire province in the name of pandemic prevention and control. Mr. Lin asserts: “The real purpose of the notice is not to control the spread of COVID-19, but to use it as an excuse to deprive people of their religious activities.”
ChinaAid strongly condemns the CCP’s forcible removal of Shuixin Church’s cross, and urges officials: Respect China’s “constitutional” right for “freedom of religious belief”—stop infringing on Chinese citizen’s religious freedom.