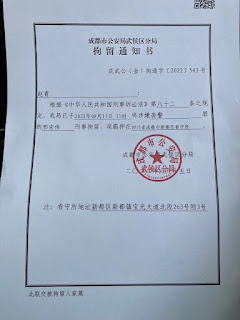 (Chengdu, China—August 18, 2022) On the evening of August 15, Zhao Qing, a congregant of Early Rain Covenant Church, came to the police station and picked up the criminal detention notice for her husband, Xing Hongwei (pen name: A Xin). Authorities arrested Xing while raiding an Early Rain gathering the day prior. Chengdu City Wuhou District Bureau of Public Security detained him at Chengdu City Xindu District Detention Center on the charge of “assaulting a police officer.”

20 Chengdu police officers, including undercover agents, raided Early Rain Covenant Church’s Sunday service at a local tea house and detained nearly 60 Christians. Police locked the doors and announced that the gathering was illegal and unlawful. They demanded, without legal basis, for each person to register their IDs. A Xin sat in the tea house and ignored the police’s demands but did not actively “assault” them, except for some resistance to physical assault when they forced him to register his ID. Police coerced A Xin and escalated the conflict. His wife and other believers explained to both sides and tried to stop them from fighting during the chaos.

“Brother A Xin was not in the room because he was diagnosed with meningitis last year, has been debilitated, and is on medication to control the illness. However, his wife—Zhao Qing— and his daughter attended the service yesterday. A Xin said that he accompanied his wife and daughter, so he sat outside the room. Police checked him. Brother A Xin said that he wasn’t in the room, but why was he pushed into it?”

“Xin Hongwei (A Xin) was slapped by police because he was unwilling to comply with the police’s demand to write down his ID. Then they had a physical conflict. Police pressed Xing Hongwei onto the ground and forcibly took him away… Later, we learned that Xing Hongwei was criminally detained on the charge of “assaulting a police officer.”

It is said that A Xin was criminally detained because he did not cooperate with police even at the police station; the head of the national security branch said that many believers of Early Rain witnessed the event and disclosed it to foreign media.

According to the news story by RFA, Bob Fu, the president of ChinaAid, felt outraged after learning that Chengdu police raided Early Rain Covenant Church’s Sunday service and arrested Xing Hongwei. He told reporters that Chengdu police stripped the citizens of religious freedom:

“Chengdu Early Rain Covenant Church was planted by Pastor Wang Yi. Wang Yi was sentenced to nine years because his sermons suggested that Xi Jinping should stop breaking the Constitution of P.R.C. by issuing anti-religion policies. Over 100 brothers and sisters were arrested during that time. This past Sunday’s raid is another severe persecution against Early Rain Covenant Church’s Sunday service.”

Congregants of Early Rain Covenant Church have been discriminated against and threatened by the Chinese government since the crackdown on December 9, 2018. Coworkers’ families have been monitored, watched, followed, and summoned for three years. It became common for landlords to expel and evict members without reason. Most gatherings have been monitored. Despite the authorities’ massive and constant infringement on religious freedom, the church seeks peace while practicing its faith.

Early Rain Covenant Church calls on churches and Christians across the world to:

1. Intercede for Pastor Wang Yi and Elder Qin Defu who are still imprisoned and their families, house churches in China, and Early Rain Covenant Church. May the gospel be thrived as we face adversities.

2. pray for Brother Xing Hongwei who is detained, his wife-Zhao Qing, and his 10-year-old daughter Xing Jiayin. May the Lord put faith in the family, watch over Brother Xing’s health and soul, and heal his illness.

3. lift up each congregant of Early Rain Covenant Church. May the Lord grant us patience and deepen our understanding of Christ’s gospel in the long persecution and restriction, enjoy the free life, be willing to endure suffering because of love, and have comfort and joy which can’t be taken due to the hope of resurrection.

4. pray for the Chinese government and Chengdu police. May the Lord overturn the hearts of the Chinese government so that they wouldn’t act arbitrarily nor regard Christ’s churches as the country’s enemies... Why does the government increase God’s wrath on themselves? May the Lord help Chengdu authorities and police to repent, stop infringing on Christians’ physical and religious freedom, and not despise God’s grace. Wouldn’t they know that the Lord’s kindness leads them to repentance?

The “129” incident refers to the massive crackdown against Early Rain on December 9, 2018