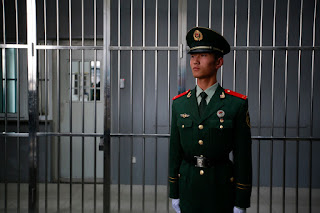 (Guiyang City, Guizhou Province—Nov. 5, 2020) Since Guiyang City police raided the worship service (gathering) that Dai Yankun, preacher, and ten other believers attended on October 25, Dai remains in custody. As Dai, leader of the Enze Fellowship in Huaxi District, Guiyang, remains in detention on unknown grounds, his family does not know when Dai may be released.

In addition to Dai, police seized ten other persons attending the gathering, and transported them to the police station. There, authorities interrogated each detainee for several hours.

One believer, worshiping with Dai and others at approximately 9 a.m., said:

Ten of us were worshipping God together. As soon as we finished singing the first hymn, the Huaxi District Bureau of Ethnic and Religious Affairs and special police raided our gathering. They did not show any legal documents at that time but ordered us to go to the police station for investigation.

According to local believers, more than ten people meet every week at the Enze Fellowship, established for more than ten years. The Public Security authority has repeatedly asked the church to join the Three-self Church but church members have continually refused. State Security Police have often summoned preacher Dai Yankun for interrogation.

An anonymous church believer said that after police transported those arrested October 25 to the Huaxi branch of Guiyang Public Security Bureau, Public Security officials harassed and insulted them. “Police forced us to change into the detention center’s numbered uniforms. They recorded interview notes. Officials forced us to sign a “so-called” letter of commitment. During this time, a policeman repeatedly asked us to join the Three-self church.”

In recent years, authorities have banned many unofficial family churches in Guiyang. Officials have confiscated church properties. Authorities sold the property of Huoshi (living stone) church, for example. They sentenced many believers to prison.

Also, according to the believers of the Enze Fellowship, during the period of detention, the public security enquired about the church’s financial situation, its funding sources, and the status of offerings. Authorities registered personal data of each believer, and detained many for four hours.